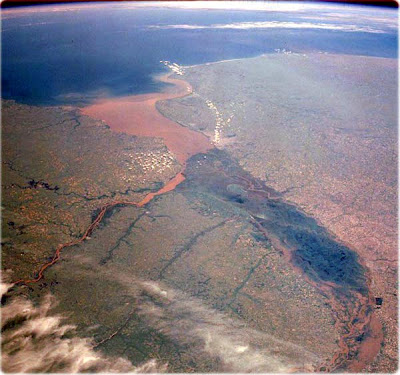 Rio de Janeiro to Montevideo
We have had this morning a true specimen of the Plata weather. The lightning was most vivid, accompanied by heavy rain & gusts of wind. The day has been exceedingly cold & raw. We passed through large flocks of different sea-birds; and some insects & a bird very like a yellow hammer flew on board. We are about 50 miles from Cape St Marys. I have just been on deck, the night presents a most extraordinary spectacle: the darkness of the sky is interrupted by the most vivid lightning, St. Elmo's fire. The tops of our masts & higher yards ends shone with the Electric fluid playing about them, the form of the vane might almost be traced as if it had been rubbed with phosphorus. To complete these natural fire-works, the sea was so highly luminous that the Penguins might be tracked by the stream of light in their wake. As the night looked dirty & there were heavy showers squalls of rain & wind, we have dropped our anchor.
.
St. Elmo's Fire (a glowing light seen on the tops of masts caused by a discharge of atmospheric electricity which gives off a crackling or fizzing noise). Fortunately the Beagle was equipped with William Harris's new lightning conductors, which worked perfectly during the entire voyage.
Posted by Arborfield at 08:05