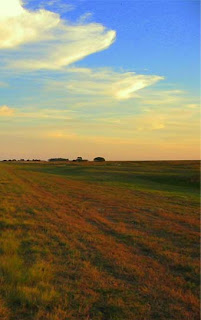 Montevideo
At last the unsettled politicks & weather have permitted us to walk in the country: Wickham, Sulivan, Hammond & myself went out shooting & if our sport was not very good the exercise was most delightful.
Hammond & myself walked in a direct line for several miles to some plains covered with thistles, where we hoped to find a flock of Ostriches. We saw one in the distance; if I had been by myself, I should have said it was a very large deer running like a race-horse, as the distance increased it looked more like a large hawk skimming over the ground. The rapidity of its movements were astonishing. As the breeze was rather too stiff for boats, it had been determined to walk from the Mount round the bay to the town. When far distant from it, Wickham & Sullivan found themselves so tired, that they declared they could move no further. By good luck a horseman came up, whom we hired to carry them by turns till another horse was found; & thus we arrived just before the city gates were closed for the night.
Posted by Arborfield at 08:42