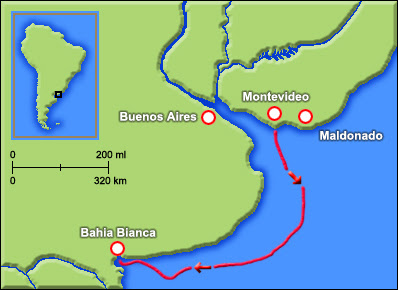 First Cruise
In middle of day anchored near Point Piedras, & sent our boats to sound. Shortly after getting under way, the water suddenly shoaled & we grazed the bottom rather too sensibly. In calm weather this is of little consequence, but when there is any sea, it does not take long to knock a hole in the bottom. The coast was very low, & covered with thickets. The extreme similarity of different parts of the banks is the chief cause of the difficulty of navigating this river. The weather has been beautifully clear during these last two days. I do not believe there has been one single cloud in the heavens. Several land-birds took refuge in the rigging, such as larks, fly-catchers, doves & butcher-birds & all appeared quite exhausted. To night we have anchored North of Cape St Antonio, as soon as we double this we shall be in the open ocean. Already the water has lost its ugly muddy colour.
Posted by Arborfield at 07:36