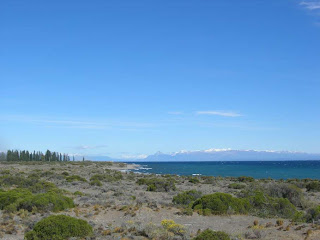 Buenos Aires
We certainly are a most unquiet ship; peace flies before our steps. On entering the outer roadstead, we passed a Buenos Ayres guard-ship. When abreast of her she fired an empty gun; we not understanding this sailed on, & in a few minutes another discharge was accompanied by the whistling of a shot over our rigging. Before she could get another gun ready we had passed her range. When we arrived at our anchorage, which is more than three miles distant from the landing place; two boats were lowered, & a large party started in order to stay some days in the city. Wickham went with us, & intended immediately going to Mr Fox, the English minister, to inform him of the insult offered to the British flag. When close to the shore, we were met by a Quarantine boat which said we must all return on board, to have our bill of health inspected, from fears of the Cholera. Nothing which we could say, about being a man of war, having left England 7 months & lying in an open roadstead, had any effect. They said we ought to have waited for a boat from the guard-ship & that we must pull the whole distance back to the vessel, with the wind dead on end against us & a strong tide running in.
During our absence, a boat had come with an officer whom the Captain soon despatched with a message to his Commander to say "He was sorry he was not aware he was entering an uncivilized port, or he would have had his broadside ready for answering his shot". When our boats & the health one came alongside, the Captain immediately gave orders to get under weigh & return to M Video. At same time sending to the Governor, through the Spanish officer, the same messages which he had sent to the Guard-ship, adding that the case should be throughily investigated in other quarters. We then loaded & pointed all the guns on one broadside, & ran down close along the guard-ship. Hailed her, & said that when we again entered the port, we would be prepared as at present & if she dared to fire a shot we would send our whole broadside into her rotten hulk.
We are now sailing quietly down the river. From M Video the Captain intends writing to Mr Fox & to the Admiral; so that they may take effective steps to prevent our Flag being again insulted in so unprovoked a manner. From what I could see of the city of Buenos Aires it appears to be a very large place & with many public buildings. Its site is very low & the adjoining coast is elevated but a few feet above the level of the water.
Posted by Arborfield at 07:03