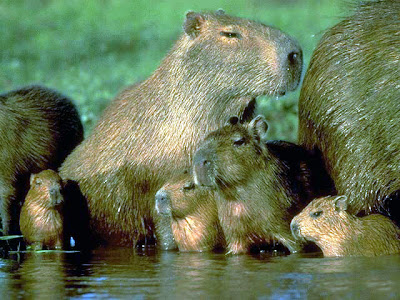 Montevideo
As the boat was landing me at the Mount, we surprised a large Cabra or Capincha on the rocks. After a long & animated chase in a little bay, I succeeded in shooting it through the head with a ball. These animals abound in the Orinoco & are not uncommon here, but from their shyness & powers of swimming & diving are difficult to be obtained. It is like in its structure a large guinea-pig: in its habits a water rat. It weighed 98 pounds. Having sent my game on board in triumph, I collected great numbers of different animals: some beautiful snakes & lizards & beetles. Under stones were several scorpions about 2 inches long; when pressed by a stick to the ground, they struck it with their stings with such force as very distinctly to be heard.
The Druid has returned from Buenos Ayres & brought from its government a long apology for the insult offered to us. The Captain of the Guard-ship was immediately arrested & it was left to the British consul’s choice whether he should any longer retain his commission.
Posted by Arborfield at 07:08