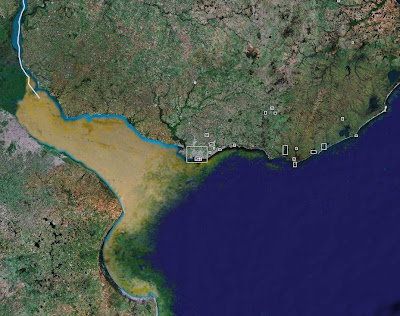 First Cruise
Torrents of rain & the atmosphere was so thick, that it was impossible to continue the survey, we remained therefore at anchor. The bottom was rocky & in consequence plenty of fish: almost every man in the ship had a line overboard & in a short time a surprising number of fine fish were caught. I also got some Corallines which were pre-eminently curious in their structure. We had to day a beautiful illustration how useful the Barometer is at sea. During the last three or four fine days it has been slowly falling. the Captain felt so sure, that shortly after it began to rise we should have the wind from the opposite quarter, the South, that when he went to bed he left orders to be called when the Barometer turned.

Accordingly at one o’clock it began to rise, & the Captain immediately ordered all hands to be piped up to weigh anchor. In the course of an hour from being a calm it blew a gale right on shore, so that we were glad enough to beat off. By the morning we were well out at sea; so with snug sail cared little for the breeze or the heavy swell. If we had not a Barometer, we probably should have remained two hours longer at anchor, & then if the gale had been a little harder we should have been in a most dangerous situation. As it was, the sea was very heavy & irregular, it fairly pitched our Howitzer out of the slide into the sea. This was not our only misfortune, as in weighing ship, we tore our anchor into pieces & quite disabled it for use.
Posted by Arborfield at 07:56