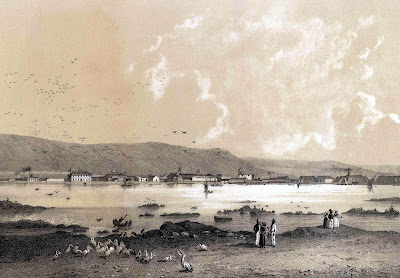 The country is here equally unproductive. They have a well (36 yards deep) from which some bitter Saltish water is procured, & firewood at twelve miles distance. Nearer to the main Cordillera there are some few little villages, such as Tarapaca, where having more water the inhabitants are enabled to irrigate a little land, & produce hay on which the mules & Jackasses employed in carrying the Saltpetre feed. — The owner complained much of the heavy expences. The Nitrate of Soda, purified by solution in boiling water, is sold at the Ships side at 14 shillings the 100 pounds. — The mine consists of a thick (2–3 ft) hard layer of tolerably pure Salt, which is almost on the surface of the Land. The stratum follows the margin of a grand basin or plain which manifestly has once been either a lake or inland sea. — The present elevation is 3300 ft. — In my return I made a round by the famous Mineral of Guantajaya; the village entirely consists of the families of the miners; the place is utterly destitute, water is brought by animals from about 30 miles. — At present the mines produce scarcely anything; they have formerly been worked to a great extent; one having a depth of 400 yards. Masses, very many pounds weights, of Silver have been extracted, so pure as to require no process but running them down into bars.

We reached Iquique after sunset & I went on board, when the Beagle weighed her anchor for Lima. I am very glad we have seen this place, I understand it a complete type of the greater part of the coast of Peru.

Captain Fitzroy’s Journal:
Much attention and kindness were shown to Captain Seymour by his acquaintance at Valparaiso; but it could not be expected that he should be cheerful, or inclined to see people, excepting intimate friends, at that time; particularly as the death of Mr. Lane was an additional blow much felt by him.
Posted by Arborfield at 07:00