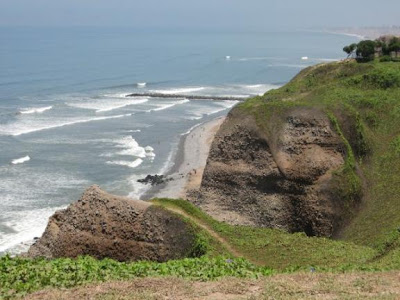 No state in S. America, since the declaration of the Independence, has suffered more from Anarchy than Peru: at present there are four chiefs in arms for supreme government. If one should succeed in becoming very powerful, the others for a time coalesce against him, but afterwards are again disunited. The other day at the Anniversary of the Independence, high mass was performed, the President partaking of the Sacrament; during the "Te Deum laudamus" instead of each regiment displaying the Peruvian flag, a black one with death's head was unfurled. Imagine what a government, when such a scene could be ordered on such an occasion to be typical of their determination of fighting to death! — This state of affairs has happened very unfortunately for me, as I am precluded from making any excursions beyond the limits of the Towns. — The barren Isd of S. Lorenzo which forms the harbor is nearly the only secure walk. — I climbed one day to the highest part, nearly 1200 ft high. This is within the limit of the region of Clouds at this season. I there met with half a dozen different kinds of plants & an abundance of Cryptogamic vegetation; on the hills near Lima, at a little greater elevation, the ground is carpeted with moss & there are some beautiful yellow lilies called Amancaes. This shows a much greater humidity than in a corresponding situation at Iquique. Gradually travelling Northward, the climate becomes damper, & at Guyaquil there are luxuriant forests.

Captain Fitzroy’s Journal
On the 22d, both ships sailed from Coquimbo, and soon afterwards parted company. The Conway stood to the westward, 'close-hauled;' while the Blonde steered towards the north with a fresh southerly wind.

What caused the loss of the Challenger?—is a question not easy to answer with certainty. The error in her reckoning amounted to more than forty miles; and the only way in which I can account for it to my own satisfaction is, that while the north-west wind was blowing, a current set to the southward and eastward, for which no allowance was made, as those on board could not be aware that such a current might be found, its existence not being known. A south-east current was not to be expected thereabouts; for the general set of the waters is northerly, excepting near the land, and they thought themselves in the offing. But currents are very uncertain and treacherous in most places. Unusual winds, peculiar seasons affecting the weight of the atmosphere, and those powerful interrupters of all order—earthquakes, have immediate effect upon the great ocean, as well as upon small bodies of water, though not always so visibly.
Posted by Arborfield at 07:48