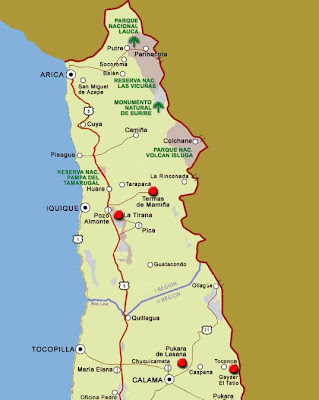 Copiapo to Iquique (by sea!)
In the middle of the day the Beagle made sail...

Captain Fitzroy’s Journal:
As soon as the barge was hoisted in, the frigate again made sail off shore; but a fortunate mistake caused the main-yard to be squared about midnight, and at daybreak next morning we were in a good position off the entrance of the river. The Blonde then steered towards the land, and at nine anchored near the River Leübu, about a mile from Tucapel Head. Every boat was hoisted out, and the work of embarkation proceeded rapidly. Though a swell made the ship roll heavily, and delayed the boats along-side, the weather was so fine and a south-east wind so favourable, that the quickness of going and returning made amends for some delay in discharging each cargo. At six in the evening, Captain Seymour came on board with the last party of his crew, and at eight, the Blonde weighed and made sail, before a fresh and favourable breeze.

Most of the tents remained standing, being of very little value, and some of the stores were left. For what was abandoned, both there and at Molguilla, the commodore appointed Vogelborg to be agent, leaving him on the spot to take charge: and he wisely asked one of the Chilians who lived in the neighbourhood, and had generally supplied the shipwrecked crew with provisions, to join him in his undertaking.

Between them they might have recovered many things of value to individuals, but, to the British Government, nothing worth the great expense of carriage to Concepcion.

Mr. Rouse sent his servants back by land, with his horses and mules, and accompanied his esteemed friend, Captain Seymour, in the Blonde. The numerous Indians and others whom we left gathering round the encampment, in all probability saved Vogelborg and his partner the trouble of taking care of much of the property. They reminded me of the vultures which in those countries gather round the places where men are slaughtering cattle.
Posted by Arborfield at 07:43