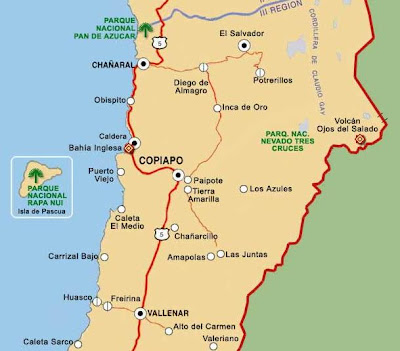 We reached the port at Noon. — It is a miserable little assemblage of a few houses, situated at the foot of some sterile plains & hills.— At present, from the river reaching the sea they enjoy the advantage of fresh water within a mile & a half. — On the beach there were large piles of merchandize & the little place had an air of bustle & activity. — I found the Beagle had arrived on the 3rd. Capt. FitzRoy was not on board: at Valparaiso he joined the Blonde to assist as Pilot in taking off the coast of Chili, South of Concepcion, the crew of H.M.S. Challenger, which had there been wrecked. — I felt very glad to be again on board the Beagle. — In the evening I gave my "adios" with a hearty goodwill to my companion, Mariano Gonzales, with whom I had ridden so many leagues in Chili.

In a letter to Caroline Darwin, Charles wrote: “When I reached the port of Copiapo, I found the Beagle there, but with Wickham as temporary Captain. Shortly after the Beagle got into Valparaiso, news arrived that H.M.S. Challenger was lost at Arauco, & that Capt Seymour a great friend of FitzRoy & crew were badly off amongst the Indians. — The old Commodore in the Blonde was very slack in his motions, in short afraid of getting on that lee-shore in winter; so that Capt FitzRoy had to bully him & at last offered to go as Pilot. — We hear that they have succeeded in saving nearly all hands, but that the Captain & Commodore have had a tremendous quarrel; the former having hinted some thing about a Court-Martial to the old Commodore for his slowness. — We suspect, that such a taught hand, as the Captain is, has opened the eyes of every one fore & aft in the Blonde to a most surprising degree. We expect the Blonde will arrive here in a very few days & all are very curious to hear the news; no change in state politicks ever caused in its circle more conversation, that this wonderful quarrel between the Captain & the Commodore has with us.

Captain Fitzroy’s Journal:
The day broke clearly for the first time during the longest week I ever passed, and we saw the land distinctly, from Cape Rumena to Tirua, with Mocha Island, strange to say, for the first time—near it as we had often been. Now that the tops of the hills were quite free from fog or cloud, I recognised the Heights of Tucapel at the first glance; and after looking for some minutes at their summits, through a good glass, I distinctly saw smoke rising. Standing towards them—in half an hour flags were discerned on the heights, and there was no longer any doubt; yet no steps were taken until near one o'clock, though it was a beautiful, and almost calm day. From nine in the morning until one, the Blonde lay almost becalmed, about five miles from the land. At one, three boats were sent to the mouth of the Leübu, with some money and a small supply of bread; but a current setting along the shore from the northward delayed their reaching the entrance of the river until evening.

We found the greater part of the Challenger's crew still in health; but delay and bad weather had increased the sick-list, and two of her party (the assistant-surgeon and a young midshipman) were in danger: waiting so long in uncertainty, and without employment, in a wet, dirty place, had tried all their constitutions severely. It was too late to attempt going out into the offing after the Blonde, (which was standing to sea) with the gig and cutter, two indifferent boats; so manning the barge with a double crew, one crew being men of the Challenger, and taking one of her officers (Lieutenant Collins) with me, I hastened out of the river as the sun was setting. A light breeze from the land favoured us, and though the Blonde was hull down in the south-west when we started, we were happy enough to get on board at about eight o'clock.

In going off to the ship after it became dark, we kept the end of a piece of old gun-breeching burning, held up in the bow of the boat. The light, as strong almost as that of a false fire, was seen plainly on board the ship, and then she was hove-to.
Posted by Arborfield at 07:44

Quite an adventure for the Captain on his birthday !

I reckon he forgot his birthday in all the excitement. Tomorrow Charles actually sets sail in the Beagle (bet he's sea-sick).