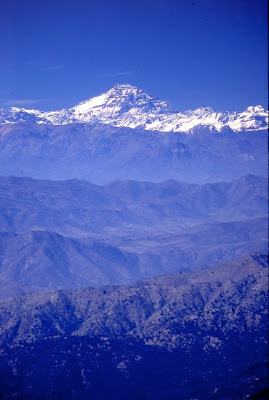 Captain Fitzroy’s Journal
The irreclaimably barren appearance of the sea coast of Northern Chile, is very repulsive to an eye accustomed to woodland scenery: yet there is an effect in its lofty mountains, which seem to rise abruptly almost from the ocean, that charms one for a time. Just before sunrise is generally the most favourable moment for enjoying an unclouded view of the Andes in all their towering grandeur: for scarcely have his beams shot between their highest pinnacles into the westward vallies, when clouds of vapour rise from every quarter, and during the rest of the day, with few exceptions, obscure the distant heights.

It has been long supposed that the Andes are higher about the equator than near or beyond the tropic; but the Beagle's measurements of Aconcagua and Villarica, prove that there is still much to be ascertained on this subject. Few results, depending upon angular measurement, are more difficult to obtain with accuracy than the heights of distant mountains. With respect to Aconcagua, though a variety of measurements, taken by different officers at various times, agreed together so closely as to give from 23,200 to 23,400 feet for the vertical elevation of that volcano above the level of the sea, I would not claim to be much nearer the truth than within 500 feet.
Posted by Arborfield at 07:54