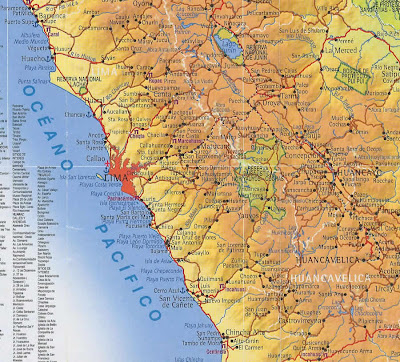 I took a place in a coach which runs twice every day to Lima & spent five very pleasant days there. There is so much hospitality in these countries & the conversation of intelligent people in a new & foreign place cannot fail to be interesting. Moreover a residence of some years in contact with the polite & formal Spaniards certainly improves the manners of the English merchants. — I found the Consul General, Mr Wilson, most exceedingly obliging: having been Aid de Camp to Bolivar he has travelled over much of S. America & knows its inhabitants rightwell.

Lima stands on a small plain formed during the gradual retreat of the sea; out of it rise barren steep hills like Islands. It is irrigated by two streams, the valleys of which rapidly contract & are hidden between the headlands of the first Cordilleras. The plain is divided into large green fields divided by straight mudwalls; there are very few trees excepting some willows & fruit trees. By the presence of an occasional cluster of Banana plants & Orange frees only does the landscape partake of a Tropical character. The city of Lima is now in a wretched state of decay; the streets are nearly unpaved & in all directions heaps of filth are piled up. — Amongst these the Gallinazoes, tame as Poultry, are picking up bits of Carrion. There is little air of business; there are few Carriages, carts or even Cargo-Mules in the streets. — The houses have generally an irregular upper story, built on account of the Earthquakes of plastered wood-work; some of the old-houses now used by several families are immensely large & would rival in the suites of Apartments the most magnificent in London. Lima must indeed formerly have been a splendid, but small city; the extraordinary number of churches give to it, especially when seen from a short distance, a character quite distinct from the generality of towns.

There are two things in Lima, which all Travellers have discussed; the ladies "tapadas ", or concealed in the saya y Manta, & fruit called Chilimoya. To my mind the former is as beautiful as the latter is delicious. The close elastic gown fits the figure closely & obliges the ladies to walk with small steps which they do very elegantly & display very white silk stockings & very pretty feet. — They wear a black silk veil, which is fixed round the waist behind, is brought over the head, & held by the hands before the face, allowing only one eye to remain uncovered. — But then that one eye is so black & brilliant & has such powers of motion & expression, that its effect is very powerful. — Altogether the ladies are so metamorphised; that I at first felt as much surprised, as if I had been introduced amongst a number of nice round mermaids, or any other such beautiful animal. And certainly they are better worth looking at than all the churches & buildings in Lima. — Secondly for the Chilimoya, which is a very delicious fruit, but the flavour is about as difficult to describe, as it would be to a Blind man some particular shade of colour; it is neither a nutritive fruit like the Banana, or a crude fruit like the Apple, or refreshing fruit like the Orange or Peach, but it is a very good & large fruit & that is all I have to say about it.
Posted by Arborfield at 07:04