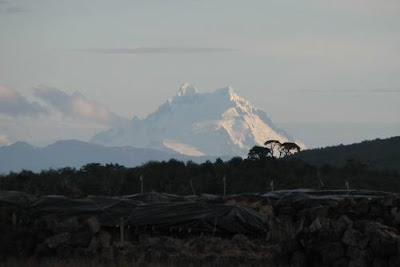 Straits of Magellan
As soon as observations were obtained, we made sail in order to leave the Straits & survey the East coast of Tierra del Fuego.
Captain Fitzroy’s Journal:
After dusk, on the 10th, while endeavouring to enter New Bay, with a fresh wind and strong flood-tide, the Liebre got into a 'race,' and was hustled within a fathom of a rock, over which the tide was boiling furiously. Fortunately, the Paz saw the Liebre alter course and make more sail, and by immediately following her example, avoided the danger. They then hauled off, and passed the night at sea.
Syms Covington Journal:
The 10 Feb. Here, formerly, was the city of San Filipe (Lat. 53°38'S), which contained four hundred souls who lived here three years until all their provisions, which were sent from Spain, were consumed; and receiving no more on which they fully relied and their own ground yielding nothing, out of four hundred, only twenty three escaped starvation, two of these women. Twenty two left the city and took the road to Río de la Plata, their fate never ascertained. The one that remained in the city, was afterwards taken to an English ship, and sent to Spain. From this circumstance the Port takes its name, given by Thomas Cavendish in 1587. (Vide Sarmiento's Viaje Spanish Edition)
Posted by Arborfield at 18:11