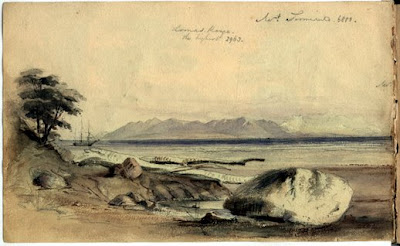 Conrad Martens' Sketchbooks:
From the left corner into the centre, the immediate foreground is occupied by a flat sandy-coloured foreshore, which from the centre to the right-hand edge of the picture is darkened by very dense shadow cast by a large, squat, loosely diamond-shaped boulder, which fills the centre right of the foreground. The boulder is coloured dark grey and purplish grey on its shadowed surfaces, and white on its right-facing flat surface, which is reflecting the sun, as it shines from the right of Martens' vantage point (ie from roughly the north, if the annotation indicates a compass bearing, implying approximately midday). Further back in the foreground, to the right of the boulder, flat sand or muddy ground, coloured purplish brown, leads to the high tide line behind the water's edge, while immediately to the left of the boulder, behind its dark shade, lies what may be a small rockpool. Beyond this, from the centre to the left of the picture, the foreground behind the immediate flat surface gives way to an uneven rocky surface with three loose rocks in a mix of darkish browns and purples, behind which at the back of the foreground, what seems to be a pair of enormous fallen white tree trunks and branches form the high tide line. The surface rises steeply at the left-hand edge of the picture, where a large tree branches near ground level into three substantial dark greyish-brown trunks; the tree is seen to its full height, and its foliage is coloured dark grey. Directly to the right of the tree, the moored Beagle is visible, shown side-on facing right. Behind and to the right of the boat, the far shore appears in pale greyish purple (the Lomas Range), stretching from the left centre to the right centre, and casting a dark blue shadow-line on the relatively calm water. In the right background, shown in white and less distinctly, there are more distant mountains, at the left-hand end of which Mount Sarmiento is recognisable by its twin peaks. The sky is blank except at the horizon behind the hills, where distant cirrus clouds are indicated, and possibly denser clouds behind Mount Sarmiento itself.
Port Famine
I left the ship at four o’clock in the morning to ascend Mount Tarn; this is the highest land in this neighbourhead being 2600 feet above the sea. For the two first hours I never expected to reach the summit. It is necessary always to have recourse to the compass: it is barely possible to see the sky & every other landmark which might serve as a guide is totally shut out. In the deep ravines the death-like scene of desolation exceeds all description. It was blowing a gale of wind, but not a breath stirred the leaves of the highest trees; everything was dripping with water; even the very Fungi could not flourish. In the bottom of the valleys it is impossible to travel, they are barricaded & crossed in every direction by great mouldering trunks: when using one of these as a bridge, your course will often be arrested by sinking fairly up to the knee in the rotten wood; in the same manner it is startling to rest against a thick tree & find a mass of decayed matter is ready to fall with the slightest blow. I at last found myself amongst the stunted trees & soon reached the bare ridge which conducted me to the summit. Here was a true Tierra del Fuego view; irregular chains of hills, mottled with patches of snow; deep yellowish-green valleys; & arms of the sea running in all directions; the atmosphere was not however clear, & indeed the strong wind was so piercingly cold, that it would prevent much enjoyment under any circumstances. I had the good luck to find some shells in the rocks near the summit. Our return was much easier as the weight of the body will force a passage through the underwood; & all the slips & falls are in the right direction.
Posted by Arborfield at 09:54