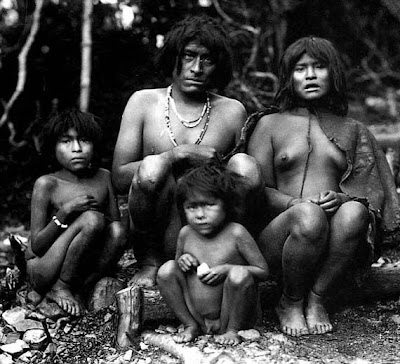 [Fuegian (Yamana) Family Group]
Tierra del Fuego
I walked or rather crawled to the tops of some of the hills; the rock is not slate, & in consequence there are but few trees; the hills are very much broken & of fantastic shapes.

Whilst going on shore, we pulled alongside a canoe with 6 Fuegians. I never saw more miserable creatures; stunted in their growth, their hideous faces bedaubed with white paint & quite naked. — One full aged woman absolutely so, the rain & spray were dripping from her body; their red skins filthy & greasy, their hair entangled, their voices discordant, their gesticulation violent & without any dignity.

Viewing such men, one can hardly make oneself believe that they are fellow creatures placed in the same world. I can scarcely imagine that there is any spectacle more interesting & worthy of reflection, than one of these unbroken savages. It is a common subject of conjecture; what pleasure in life some of the less gifted animals can enjoy? How much more reasonably it may be asked with respect to these men. To look at the Wigwam; any little depression in the soil is chosen, over this a few rotten trunks of trees are placed & to windward some tufts of grass. Here 5 or 6 human beings, naked & uncovered from the wind, rain & snow in this tempestuous climate sleep on the wet ground, coiled up like animals. In the morning they rise to pick shell fish at low water; & the women winter & summer dive to collect sea eggs; such miserable food is eked out by tasteless berries & Fungi. Jerking out little fish out of the Beds of Kelp.

They are surrounded by hostile tribes speaking different dialects; & the cause of their warfare would appear to be the means of subsistence. Their country is a broken mass of wild rocks, lofty hills & useless forests, & these are viewed through mists & endless storms. In search of food they move from spot to spot, & so steep is the coast, this must be done in wretched canoes.

They cannot know the feeling of having a home & still less that of domestic affection; without, indeed, that of a master to an abject laborious slave can be called so. How little can the higher powers of the mind come into play: what is there for imagination to paint, for reason to compare, for judgement to decide upon, to knock a limpet from the rock does not even require cunning, that lowest power of the mind. Their skill, like the instinct of animals is not improved by experience; the canoe, their most ingenious work, poor as it may be, we know has remained the same for the last 300 years. Although essentially the same creature, how little must the mind of one of these beings resemble that of an educated man. What a scale of improvement is comprehended between the faculties of a Fuegian savage & a Sir Isaac Newton. Whence have these people come? Have they remained in the same state since the creation of the world? What could have tempted a tribe of men leaving the fine regions of the North to travel down the Cordilleras the backbone of America, to invent & build canoes, & then to enter upon one of the most inhospitable countries in the world. Such & many other reflections, must occupy the mind of every one who views one of these poor Savages. At the same time, however, he may be aware that some of them are erroneous. There can be no reason for supposing the race of Fuegians are decreasing, we may therefore be sure that he enjoys a sufficient share of happiness (whatever its kind may be) to render life worth having. Nature, by making habit omnipotent, has fitted the Fuegian to the climate & productions of his country.
Posted by Arborfield at 08:17