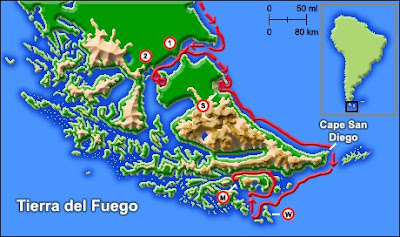 Straits of Magellan
The next day we were almost becalmed. It is a most extraordinary contrast with the last season. A sealing Schooner in the course of the day sent a boat on board; which brought lamentable news from the Falkland Islands.

The Gauchos had risen & murdered poor Brisbane & Dixon & the head Gaucho Simon, & it is feared several others. Some English sailors managed to escape & are now in the West Island. Since this the Challenger has been there & left the Governor with six (!) marines; a Governor with no subjects except some desperate gauchos who are living in the middle of the island. Of course they have taken all the half-wild cattle & horses: in my opinion the Falkland islands are ruined. This second desperate murder will give the place so bad a name that no Spanish Gauchos will come there, & without them to catch the wild cattle, the island is worth nothing.

This Sealer has been this summer at anchor for six weeks under the Diego Ramiroz islands; & without a gale of wind! The very time during which last year we had a gale of a month. He was last year at these same islands. during the gale of the 13th his deck was fairly swept, he lost all his boats &c &c. At this time two of his men were on one of the Diego rocks, where they were left miserably to perish, as he was obliged to run for the Falkland Id.

Captain Fitzroy’s Journal:
Next day (11th), they stood towards the bay again, the wind increasing fast, till it blew a gale from W.S.W., which being against a flood-tide stream, running at the rate of four knots through the entrance, raised a short hollow sea, dangerous for small craft. Battening down the hatches securely, and close-reefing, the little vessels worked through gallantly, though frequently obliged to lower their sails in squalls, or as they dived into a sea heavier than usual. The tide soon swept them beyond the narrow part, and then they were comparatively in safety.
Part of the west shores of New Bay seemed to be fit for cultivation, being covered with a fine dark soil; and there is abundance of fire-wood. Some small ponds of excellent water were found, over a clayey bed, in which were tracks of cattle. A guanaco shot here was superior to any killed elsewhere, as to condition. Many thousand seals were seen on the rocks, which did not take to the water as soon as disturbed—therefore they could not have been much molested by man.
Syms Covington Journal:
February 11th pm anchored Gregory Bay. Sailed the following morning.
Posted by Arborfield at 08:53