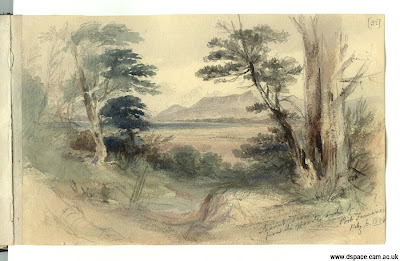 [Mount Tarn from the opposite side of Port Famine]
Conrad Martens' Sketchbooks:
The foreground consists of uneven ground in a mix of bluish-green and small areas of brown, suggesting soil with a mossy or grassy covering. In the midground to both left and right, trees in full leaf frame a line of sight to an expanse of water. The trees on the left-hand side are bluish-green, becoming a fuller dark blue towards the centre of the picture; these trees are seen to their full height. The darkness of their vegetation is due to their being in the shadow of the tree on the right, which is very much bigger. We see only the base, which branches at ground level, and the lower portion of the trunk, which are dark brown with pale patches reflecting sunlight; its foliage is mainly shown in dark grey. The water visible between the trees is blue with some white cloud reflections, behind what may be a mudflat or beach coloured purplish brown and not distinctly differentiated from the water. Further distant there is a shoreline, whose dark greyish green coloration suggests vegetation, behind which purplish-grey hills stretch behind the right-hand tree to the edge of the picture. The sky is light grey with a paler area in midheight and cumulo-nimbus clouds indicated behind the hills; the sun is shining from the right perpendicular to the line of sight.
.
Straits of Magellan
So in the morning got under weigh to run to Port Famine; The wind fell light; so the Captain sent the ship back to her anchorage & proceeded in a boat to the head of Shoal Harbor. During the last voyage the Captain discovered a large inland sea (Skyring water), 50 miles long; From the end of Shoal harbor we walked 5 miles across the country in hopes of being able to see it; the distance turned out to be greater than was expected & we were disappointed, if it had been nearer, the Captain had intended to have put a whale-boat on wheels & dragged it across, which would have saved much time in the survey of this Water. As soon as we came on board, the anchor was weighed & with a light air stood down for Port Famine.
The country, in this neighbourhead, may be called an intermixture of Patagonia & Tierra del Fuego; here we have many plants of the two countries; the nature of the climate being intermediate: a few miles to the South the rounded Slate hills & forests of evergreen beeches commence. — The country is however throughily uninteresting.
Posted by Arborfield at 08:29