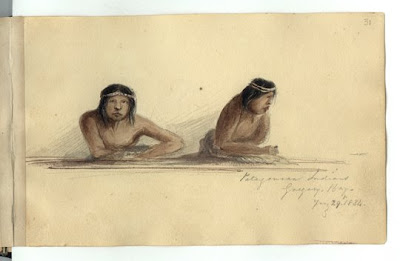 [Patagonian Indians – Gregory Bay]
Conrad Martens' Sketchbooks:
The left-hand figure is possibly resting his arms on a surface, or (as in the case of the right-hand figure) on his legs folded beneath him as he sits on the ground. The clothing consists of a grass skirt coloured purplish-grey. The skin is brown, the hair long, straight and black. His pale thin headband has a dark decoration, which is dotted across the forehead, and then continuous over and behind the ears.
.
Straits of Magellan
With very baffling winds we anchored late in the evening in Gregory Bay, where our friends the Indians anxiously seemed to desire our presence. During the day we passed close to Elizabeth Island, on North end of which there was a party of Fuegians with their canoe &c. They were tall men & clothed in mantles; & belong probably to the East Coast; the same set of men we saw in Good Success Bay; they clearly are different from the Fuegians, & ought to be called foot Patagonians. Jemmy Button had a great horror of these men, under the name of "Ohens men". "When the leaf is red, he used to say, Ohens men come over the hill & fight very much."
Posted by Arborfield at 08:14