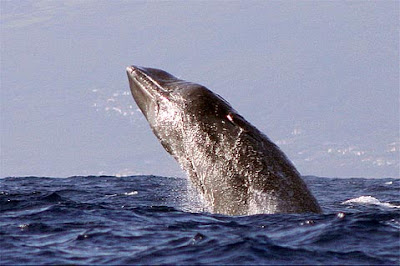 Straits of Magellan
During this week a complete survey has been made of the East coast of Tierra del Fuego. We landed only once, which was at the mouth of what was formerly supposed to be St Sebastian’s Channel, it now turns out only to be a large wild bay. The country here is part of Patagonia, open & without trees; further to the South, we have the same sort of transition of the two countries which is to be observed in the Straits of Magellan. The scenery has in consequence a pretty, broken & park-like appearance. In St Sebastian bay, there was a curious spectacle of very many Spermaceti Whales, some of which were jumping straight up out of the water; every part of the body was visible excepting the fin of the tail. As they fell sideways into the age water, the noise was as loud as a distant great gun. By the middle of the day we were, after very fortunate weather, at anchor in Thetis Bay, between C St Vincent & Diego.

Upon going on shore, we found a party of Fuegians; or the foot Patagonians, fine tall men with Guanaco mantle. The wigwam was also covered with the skin of the same animal. It is a complete puzzle to every-one, how these men with nothing more than their slight arrows, manage to kill such strong wary animals.