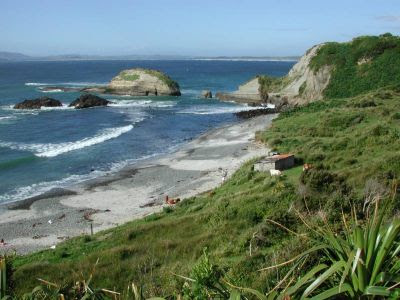 Chiloe
We steered for the Isd of Lemuy. — I was anxious to examine a reported coal mine, which turned out to be Lignite of little value in the tertiary Sandstones of which these Islands are composed. — During the day we passed many Chapels; the number of these all over Chiloe is remarkable; every collection even of a few houses has its Capella. When we reached Lemuy we had great difficulty in finding a place for the tents, owing to it being Spring tides & the land being universally wooded to the high water line.

We were soon surrounded by a large group of the nearly pure Indian inhabitants. They were much surprised at our arrival & said one to the other, this is the reason we have seen so many Parrots lately; the Cheucau (an odd red-breasted little bird, which inhabits the thick forest & utters very peculiar noises) has not cried "beware" for nothing. They were soon eager for barter. Money is scarcely worth anything, but their esteem & anxiety for tobacco was something quite extraordinary: after tobacco, indigo came next in value, then capsicum, old clothes & gunpowder; the latter article was required for a very innocent purpose; each parish has a public musket, & the gunpowder was wanted to make a noise on their Saint or Feast days.

The people here live chiefly on shell-fish & potatoes; at certain seasons they catch also, in "Corrales"or hedges under water, many fish which are left as the tide falls dry on the mud-banks. — They occasionally possess fowls, sheep & goats, pigs, horses & cattle, the order in which they are mentioned expressing their frequency. — I never saw anything more obliging & humble than the manners of these people. — They generally begin with stating that they are poor natives of the place & not Spaniards & are in sad want of tobacco and other comforts. At Caylen, the most Southern island, we bought with a stick of tobacco, of the value of three half-pennies, two fowls (one of which the Indian stated had skin between its toes & turned out to be a fine duck): & with some cotton handkerchiefs worth three shillings, we procured three sheep & a large bunch of onions. — All these purchases were transacted under the denomination of money; the stick of tobacco was valued at one shilling & the proportion of a shilling to the half-pennies expresses the profit of the traders with these Islanders.

The Yawl at this place was anchored some way from the shore & we had fears for her safety during the night. Our pilot, Mr Douglas, accordingly told the constable of the district that we always placed sentinels with loaded arms, & not understanding Spanish, if we saw any person in the dark, we should assuredly shoot him. The constable, with much humility, agreed to the propriety of this consequence & promised us that no one should stir out of his house during the night.
Posted by Arborfield at 07:33