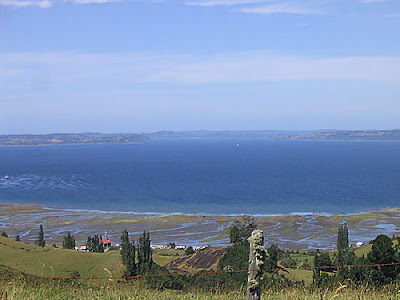 Chiloe
In the morning we stopped for a few minutes at a house at the extreme North point of Isd of Laylec. This was the last house; the extreme point of S. American Christendom; & a miserable hovel it was. The latitude is about 43° 10′, which is considerably to the South of the R. Negro on the Atlantic coast of America. The people were miserably poor & as usual begged for a little tobacco. I forgot to mention an anecdote which forcibly shows the poverty of these Indians; some days since, we met a man who had travelled 3 & ½ days on foot, on bad roads, & had the same distance to return to recover the value of an axe & a few fish! How difficult it must be to buy the smallest article, where such trouble is taken to recover so small a debt.

We had a foul wind & a good deal of swell to struggle with, but we reached the Island of S. Pedro, the SE extremity of Chiloe, in the evening. When doubling the point of the harbor, Mrs Stuart & Usborne landed to take a round of angles. A fox (of Chiloe, a rare animal) sat on the point & was so absorbed in watching their mænœvres, that he allowed me to walk behind him & actually kill him with my geological hammer. We found the Beagle at anchor, she had arrived the day before & from bad weather had not been able to survey the outer coast of Chiloe. The most singular result of the observations is that Chiloe is made 30 miles too long, hence it will be necessary to shorten the island; ¼ of its received size.

Captain Fitzroy’s Journal:
These three outlying islands are thickly wooded, rather level, compared with their neighbours, and not exceeding eight hundred feet in height. There are few, if any others, like them in the Chonos Archipelago; almost all the rest, however portions of some may resemble them, being mountainous, and very like those of Tierra del Fuego and the west coast of Patagonia, beyond 47° south; therefore I need only remark, that the vegetation is more luxuriant; that there is a slight difference in it, consequent probably upon a milder climate; that some productions, such as canes and potatoes, &c., are found there which do not grow near the Strait of Magalhaens; and that in other respects, as to appearance, nature, and climate, the Chonos Archipelago is like Tierra del Fuego in summer.
Posted by Arborfield at 07:27