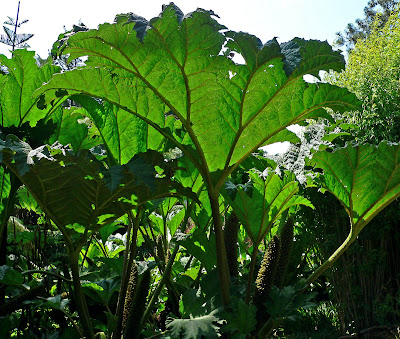 Chiloe
I noticed to day growing on the cliffs of soft sandstone some very fine plants of the Pangi*, which somewhat resembles the Rhubarb on a gigantic scale. The inhabitants eat the stalks, which are sub-acid, & with the root tan leather & prepare a black dye. (Note in margin: The stalks are called Nalca, so indeed is the plant sometimes.) The leaf is much indented in its margin & is nearly circular; the diameter of one was nearly 8 feet (giving a circumference of 24 feet!). The stalk rather more than a yard high: each plant throws out from four to six of these enormous leaves & a group of them hence has a very fine appearance.

Captain Fitzroy’s Journal:
On the 5th, we were near Huafo, which, to our surprise, we found to be twenty-five miles farther north than the Spanish charts (following Moraleda) showed its position, yet the longitude was almost correct. In a small cove, near the south-east point of Huafo, we anchored, but broke a bower-anchor in doing so; for the cove is small—an unexpected puff of wind gave us too much way—and dropping the bower in haste, it fell upon a rock, and broke.§ Only two days before another anchor was broken, near Socorro, by the ship pitching while a short scope of cable was out, and the anchor hooking to a rock. I found, on landing, that the formation of the island, like that of Socorro and Narborough Island, is a soft sandstone, which can be cut with a knife as easily as a cake of chocolate.