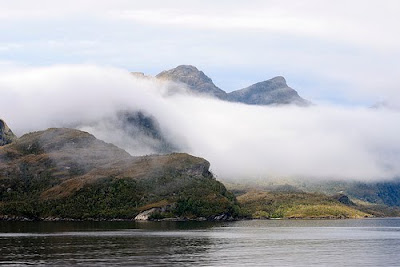 Chonos Archipelago
In the morning went on shore; to our great surprise we found the Island well stocked with fine wild Goats. The sportsmen soon killed eight, which have given us two days fresh meat. I should think these Goats must originally have been turned out by some of the old Spanish Missionary expeditions. Others besides us have visited this place; I found marks of trees long ago cut down, an old fire, & remains of a sort of Shed. I presume it has been one of the prowling tribe of Sealers. In the evening changed our anchorage to a snug cove at the foot of some high hills.

Captain Fitzroy’s Journal:
On landing an old wooden hut was discovered in a sheltered corner, and we found that the island was overrun with goats, which I suppose to have been left by the Santa Barbara's crew, if not by Machado's people. While Mr. Stokes and I were engaged with the instruments, and two boats sounding, a couple of guns were sent against the goats, and in consequence of their effectual employment in the hands of Mr. Bynoe and H. Fuller, all on board had a good fresh meal the next two days. After noon we sailed across the Bay, and found a snug, though very small cove, where we moored in security, and remained till the 4th of January, exploring the neighbourhood—an unprofitable wilderness of rocky mountains, woody and swampy valleys, islands and rocks in profusion, and inlets or arms of the sea penetrating in every direction.
Posted by Arborfield at 07:21