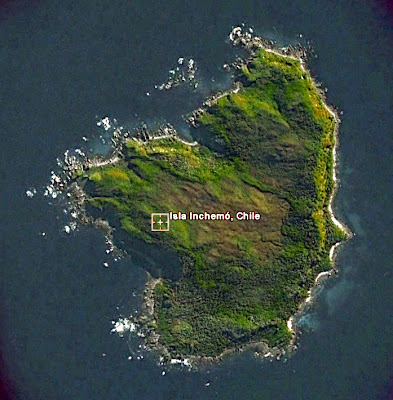 Chonos Archipelago
Ran along the Coast till we came to an anchor at Yuche Island, a little to the North of the Peninsula of Tres Montes.

Captain Fitzroy’s Journal:
While examining the coast towards Cape Taytao, we found a very dangerous patch of rocks, five miles from the nearest land; there are soundings near them. In the evening we dropped our anchor under Inchemo Island; an interesting locality, because there the Anna Pink anchored before she was drifted across the adjacent bay into Port Refuge (in 1741).

Just as all hope seemed lost, they saw the entry to a harbour (now called Bahaia Anna Pink*, Chile at 45.83S 74.83W) and were able to take refuge. For two months they stayed to perform makeshift repairs to the ship and allow the crew to recover their health before departing for Juan Fernandez. The harbour had a good fresh water supply, wild greens and game. Given the abundant provisions and minimal crew on the merchant ship, the crew was in much better health even than those on the warships at the time she was blown ashore. However, a survey after arrival at Juan Fernandez reported that she was so badly damaged that she was beyond repair so Anson had the ship broken up and the crew transferred to the Gloucester.

*Anna Pink" where "pink" is a "small sailing vessel with sharply narrowed stern and an overhanging transom".

(from George Anson's voyage around the world 1741)