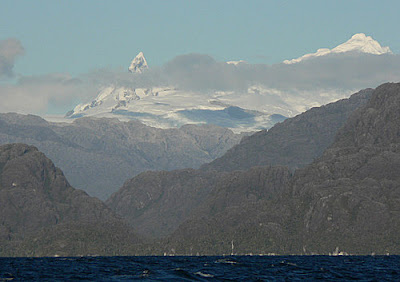 Chonos Archipelago
At last the weather barely permitted us to run out; our time has hung heavy on our hands, as it always does when we are detained from day to day by successive gales of wind. — Our Christmas day was not such a merry one as we had last year at Port Desire. — Between 30 & 40 miles of coast was surveyed & in the afternoon we found an excellent harbor. — Directly after anchoring we saw a man waving a shirt. A boat was sent & brought two men off. — They turned out to be N. American seamen, who from bad treatment had run away from their vessel when 70 miles from the land. The party consisted of five men & the officer of the watch; who together in the middle watch had lowered a boat & taken a weeks provisions with them, thinking to go along the coast to Valdivia; The boat on their first landing had been dashed into pieces. — This happened 15 months ago; since which time the poor wretches have been wandering up & down the coast, without knowing which way to go or where they were (they knew nothing of Chiloe). What a singular piece of good fortune our happening to discover this harbor at the very time they were in it. Excepting by this chance they might have wandered till they had been old men & probably would not have been picked up. — This explains the bed in the last harbor; the party had separated when this was used. — They were now all together & the boat subsequently brought off three more. — one man had fallen from a cliff & perished. — I never saw such anxiety as was pictured in the mens faces to get into the boat. — before she landed, they were nearly jumping into the water. They were in good condition, having plenty of seals-flesh which together with shell- fish had entirely supported them. — In the evening we paid a visit to their little hut made of reeds; a few days since, they had killed nine seals; they cut the flesh into pieces & secured it on sticks which they place cross-wise over the fire & thus preserve it. — They had some few clothese, a book (well thumbed), 2 hatchets & knives; with these they had hollowed out two trees to make canoes, but neither answered. — The difficulties they encountered in trying to travel up the coast were dreadful; it was in passing a head- land the man was lost; some of the Bays gave them 5 days walking to reach the head. Latterly they appear to have given up in despair their attempt at reaching Valdivia! And well they might.— They had one comfort in having always plenty of firewood; they managed to make a fire by placing a bit of tinder with a spark from a steel & flint between two pieces of charcoal, & by blowing this was sufficient to ignite it. — There are no Indians. — Their treatment on board the Whaler does not appear to have been so very bad; but their remedy, probably from ignorance of the dangers, has been a most desperately perilous one. I am very glad the Beagle has been the means of saving their lives. — Considering what they have undergone, I think they have kept a very good tally of the time; they making this day to be the 24th instead of the 28th.

Captain Fitzroy’s Journal:
Directly the weather would admit, we weighed and coasted along till the sun was getting low, when we ran under shelter from sea and wind, and anchored in the corner of a bay which I afterwards concluded must be the bay or port called Stephens, and more properly, San Estevan. While we were furling sails, some men were seen on a point of land near the ship, making signals to us in a very earnest manner. Being dressed as sailors, it was natural for us to conclude that they were some boat's crew left there to collect sealskins. A boat was sent to them, and directly she touched the land they rushed into her, without saying a word, as men would if pursued by a dreaded enemy; and not till they were afloat could they compose themselves enough to tell their story. They were North American sailors, who had deserted from the Frances Henrietta (a whaler of New Bedford), in October 1833. When off Cape Tres Montes, but out of sight of land, and in the middle of the night, these six men lowered a boat and left their ship, intending to coast along until they should arrive at Chilóe. Their first landing was effected on the 18th, but owing to negligence the boat was so badly stove that they could not repair her, and all their hopes of effecting a coasting voyage were thus crushed in the very outset.

Finding it impossible to penetrate far into the country, on account of its ruggedness, and thick forests, which, though only trifling in height, were almost impervious, they began a pilgrimage along-shore; but it was soon evident, to their dismay, that there were so many arms of the sea to pass round, and it was so difficult to walk, or rather climb, along the rocky shores, that they must abandon that idea also, and remain stationary. To this decision they were perhaps more inclined after the death of one of their number; who, in trying to cross a chasm between two cliffs, failed in his leap, fell, and was dashed to pieces. Their permanent abode was then taken up at the point which shelters Port San Estevan, now called Rescue Point; where they passed a year in anxious hope. Of course the few provisions which their boat had carried ashore were soon exhausted, and for thirteen months they had lived only upon seals' flesh, shell-fish, and wild celery: yet those five men, when received on board the Beagle, were in better condition, as to healthy fleshiness, colour, and actual health, than any five individuals belonging to our ship. Few remarks worth noticing had been made by them, as the only experienced man (whose name was John Lawson) lost his life as above-mentioned. There was an almost continual succession of rain and wind for several months after their first landing, except from the 20th to the 29th of December, which passed without rain: in July (1834) they had an extraordinary storm from south-west, which began early one morning, after a rainy night with northerly wind: and in November (1834) there were twenty-one days successively without rain. One day (in May) they saw eight vessels sailing northwards together; excepting which, not a sail was ever seen by their aching eyes till the Beagle hove in sight. Between San Andres, near which they first landed, and San Estevan, the hull of a small vessel was found, quite bedded in sand; she seemed to be about thirty-five tons burthen, from thirty to thirty-five feet in the keel, and about sixteen broad. She was full-built; neither coppered nor sheathed. In a cave, which had been used as a dwelling, near San Andres, the skull of a man was found, and some burned wood. A bracelet of beads was lying in the cave, but they noticed nothing else. The skull seemed to them to have been that of a black man. No animals were seen at any time except deer and nutria, seal and otter; the former were of a reddish colour, with short straight horns, and very rough coats: no traces of other quadrupeds were observed, nor during the whole fourteen months did they ever meet a native human being. They told me that the night tides seemed always to be a foot or more higher than those of the day, which, as they said, rose from four to seven or eight feet perpendicularly. I had intended to explore the interior of Port San Estevan; but as they had already done so, and found it terminate in a fresh water river, or rather mountain stream, I gave up that plan, and sailed next day.
Posted by Arborfield at 07:43