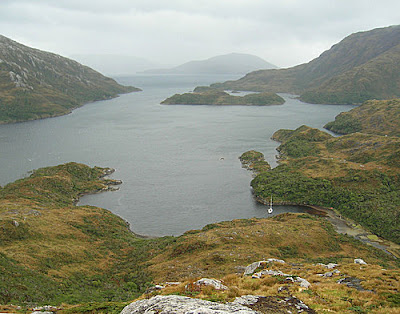 Chonos Archipelago
After breakfast the next morning, a party ascended one of the highest viz. 2400 ft. elevation. — The scenery was very remarkable; the chief part of the range is composed of grand solid abrupt masses of granite, which look as if they had been coeval with the very beginning of the world. — The granite is capped with slaty gneiss, & this in the lapse of ages of time has been worn into strange finger-shaped points. These two formations, thus differing in their outlines, agree in being almost destitute of vegetation; and this barrenness had to our eyes a more strange appearance, from being accustomed to the sight of an almost universal forest of dark green trees. I took much delight in examining the structure of these mountains. — The complicated & lofty ranges bore a noble aspect of durability — equally profitless however to man & to all other animals. Granite to the Geologist is a classic ground: from its wide-spread limits, its beautiful & compact texture, few rocks have been more anciently recognised. Granite has given rise perhaps to more discussion concerning its origin than any other formation. — We see it generally the fundamental rock, & however formed, we know it to be the deepest layer in the crust of this globe to which man is able to penetrate. — The limit of mans knowledge in every subject possesses a high interest, which is perhaps increased by its close neighbourhood to the realms of imagination.
Posted by Arborfield at 07:59