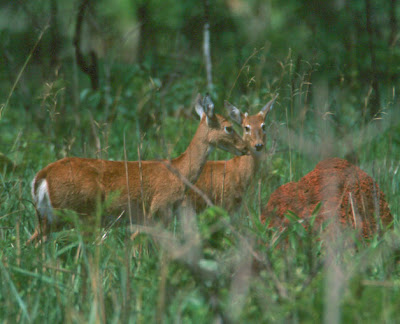 [Pampas Deer]
Bahia Blanca
I am spending September in Patagonia, much in the same manner as I should in England, viz in shooting; in this case however there is the extra satisfaction of knowing that one gives fresh provisions to the ships company.
To day I shot another deer & an Agouti or Cavy. The latter weighs more than 20 pounds; & affords the very best meat I ever tasted. Whilst shooting I walked several miles within the interior; the general features of the country remain the same, an undulating sandy plain covered with coarse herbage, which as it extends, gradually becomes more level. The bottoms of some of the valleys are green with clover: it is by cautiously crawling so as to peep into these that the game is shot.
If a deer has not seen you stand upright; generally it is possessed with an insatiable curiosity to find out what you are; & to such an extent that I have fired several times without frightening it away.
Posted by Arborfield at 07:27