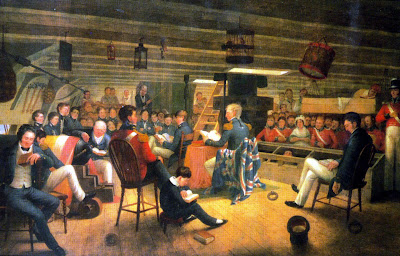 Bahia Blanca
In the morning divine service was read on the lower deck. After dinner a large party of officers went on shore to see the country. For the first two miles from the beach, it is a succession of sand hillocks thickly covered with coarse herbage; then comes the Pampas, which extend for many miles & in the distance is the Sierra de Ventana, a chain of mountains which we imagine to be lofty. The ground was in every direction tracked by the Ostriches & deer. One large one of the latter bounded up close to me. Excepting these, death appeared to reign over all other animals. I never saw any place before so entirely destitute of living creatures.
Posted by Arborfield at 09:10