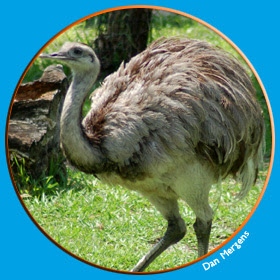 Bahia Blanca
The Spaniards, whom we some time since thought were Indians, have been employed hunting for us & have generally bivouacked near the coast. They offered to lend me a horse to accompany them in one of their excursions; of this I gladly accepted. The party consisted of 9 men & one woman; the greater number of the former were pure Indians, the others most ambiguous; but all alike were most wild in their appearance & attire. As for the woman, she was a perfect nondescript; she dressed & rode like a man, & till dinner I did not guess she was otherwise. The hunters catch everything with the two or three balls fastened to the thongs of leather; the manner of proceeding is to form themselves into a sort of crescent, each man less than a quarter of a mile apart; one goes some way ahead & endeavours to drive the animals towards the others & thus in a manner encircling them. I saw one most beautiful chase --fine Ostrich tried to escape; the Gauchos pursued it at a reckless pace, each man whirling the balls round his head; the foremost at last threw them, in an instant the Ostrich rolled over & over, its legs being fairly lashed together by the thong. Its dying struggles were most violent. The men then formed a ring & drove to the centre several cavies; they only killed one; but their riding was most excellent, especially in the quickness & precision with which they turn. The horses are soon fatigued from such violent exercise & it is necessary often to change them & pick out fresh ones from the herd which always accompanies a party. At this time of year, the eggs of the ostrich are their chief prize. In this one day they found 64, out of which 44 were in two nests; the rest scattered about by ones or twos. They also catch great numbers of Armadillos. In the middle of the day they lighted a fire & soon roasted some eggs & some Armadillos in their hard cases: They had neither water, salt or bread; of the two latter for weeks together they never taste; so that it makes little difference to them where they live.
Like to snails, all their property is on their backs & their food around them. — It was very interesting to watch, whilst seated round the fire, the swarthy but expressive countenances of my half-savage hosts. The creature of a woman flirted & actually was affected; she pretended to be frightened of my gun & screamed out "no est cargado"? We returned to the beach in the evening, where the same scene of eggs & Armadillos occurred again and I went on board. My feet were a good deal tired, the stirrups being so small that even without shoes I had difficulty in getting in the two first toes. The Gauchos always have these uncovered & separate from the other three.
Syms Covington:
Here you find immense numbers of deer, cavy, ostriches, and guanacos but OF the latter, here, I never saw many, lions, tigers, foxes, armadillos and birds of various species, snakes and insects. The armadillo burrows in the ground, IS very plentiful, and IS most excellent eating, even equal to a young suckling pig. WE FOUND AN ostrich nest with twenty seven eggs.
Posted by Arborfield at 22:19