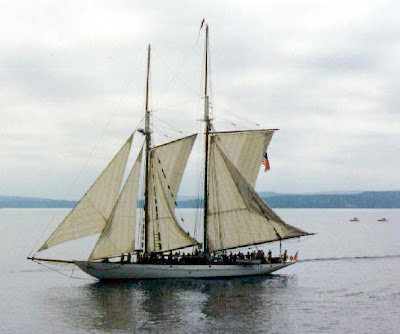 Bahia Blanca
In the morning we stood into the bay; but soon got entangled in the midst of shoals & banks; we came again to an anchor. At this time a small Schooner passed near to us. An officer was sent on board to procure information about the bay &c. The schooner was a Sealer bound from the settlement at Bahia Blanca to the Rio Negro; south of which she intended fishing for the Seals. Mr Harris, a half partner & Captain, volunteered piloting us into the bay on condition of being carried up in a boat to the Settlement; where there was another Schooner bound for the same port, & in which he intended taking a passage. By Mr Harris's assistance we arrived in the evening at a fine bay; where sheltered from all bad weather, we moored ship. Mr Harris gave us a great deal of useful information about the country. Bahia Blanca has only been settled within the last six years: previous to which even the existence of the bay was not known. It is designed as a frontier fort against the Indians & thus to connect Buenos Ayres to Rio Negro. In the time of the old Spaniards, before the independence, the latter was purchased from the native chief of the place: The settlers at Bahia Blanca did not follow this just example, & in consequence ever since a barbarous & cruel warfare has been carried on: But I shall mention more about this presently.
Syms Covington:
Bahía Blanca or the White Bay (water shallow). The land about here is low and sandy, except the Blue Mountains which are about twenty or thirty miles in the interior, and head quarters of the Patagonians. The town of Bahía Blanca is about twenty miles from here, AND inhabited by the Spaniards.
Captain Robert Fitzroy:
Our boats were soon stopped by shoal water, and I found, to my vexation, that the Beagle was anchored at the head of an inlet, between the shore and a large bank extending far towards the south-east, and that before going farther west she must retreat eastward, and look for another passage. This was an unexpected dilemma; but our prospect was improved by the appearance of a small schooner running towards us, from Port Belgrano, with a Buenos Ayrean (or Argentine) flag flying.
Very soon she came near enough for our boat to reach her, and an Englishman came on board, who offered to pilot the Beagle to a safe anchorage within the port. This was Mr. Harris, owner of the little schooner in which he sailed, (a resident at Del Carmen, on the river Negro, and trading thence along the coast), with whom we had much satisfactory intercourse during the next twelvemonth.
By his advice we weighed anchor, stood across the great north bank, in very little more water than we drew, until we got into a channel where there was water enough for any ship, and a soft muddy bottom: there we hauled up ‘west-north-west’,(**) by his direction, and with a fresh wind sailed rapidly into the extensive and excellent, though then little known harbour, called Port Belgrano; and at dusk anchored near the wells under Anchorstock Hill (or Point Johnson).
.
To give an idea of the general appearance, or almost disappearance, of the very low land around this spacious port, I will mention, that when the Beagle had crossed the north bank, and hauled up in the fair way, Mount Hermoso was nearly beneath the horizon; some bushes on the flat land southward.
In consequence of this extent of water being intersected by banks, and having so few marks, it is very difficult of access; and no place can offer less that is agreeable to the eye, especially when the tide is out, and much of the banks shows above water. A more disagreeable place to survey, or one that would occupy more time, we were not likely to find, I thought, as I looked around from the mast-head; but upon questioning Mr. Harris, I learned that a succession of similar inlets indented a half-drowned coast, extending hence almost to the Negro; and that, although the dangers were numerous, tides strong, banks muddy, and the shores every where low, the intervening ports were so safe, and so likely to be useful, that it was absolutely necessary to examine them.
(**) So constantly did Mr. Harris give this course, on subsequent occasions, that it became quite a joke; but it is nevertheless a strong corroboration of what I stated respecting the general direction of the inlets, and ridges, or ranges of hills.
Posted by Arborfield at 19:07