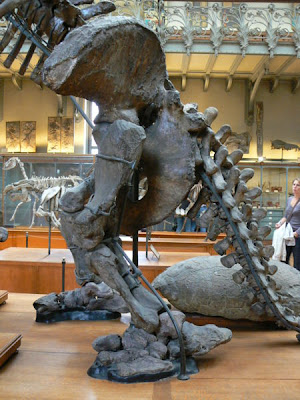 Bahia Blanca
A large party was sent to fish in a creek about 8 miles distant; great numbers of fish were caught. I walked on to Punta alta to look after fossils; & to my great joy I found the head of some large animal, imbedded in a soft rock. It took me nearly 3 hours to get it out: As far as I am able to judge, it is allied to the Rhinoceros. I did not get it on board till some hours after it was dark.

Syms Covington:
At Bahía Blanca, near Johnson’s Point, we also found the remains or bones of Megatherium, which were sent to England.
Captain Robert Fitzroy:
My friend's attention was soon attracted to some low cliffs near Point Alta, where he found some of those huge fossil bones, described in his work; and notwithstanding our smiles at the cargoes of apparent rubbish which he frequently brought on board, he and his servant used their pick-axes in earnest, and brought away what have since proved to be most interesting and valuable remains of extinct animals.
Posted by Arborfield at 08:01