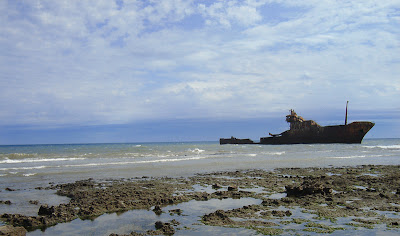 [The dangerous coast the Beagle is surveying]
.
Montevideo to Bahia Blanca
This day will always be to me a memorable anniversary; in as much as, it was the first in which the prospect of my joining the voyage wore a prosperous appearance.
Again in heaving up the anchor (one of the best & largest) it broke off like the former ones: it is supposed that the bottom consists of a clay so stiff as nearly to resemble rock, & that during the night the flue of anchor works into it, so that no power is able to wrench it out. So early in the voyage it is a great loss. The wind blew a gale; but under close reefed topsails we ran along about 70 miles of coast. Out of all this range scarcely two parts could be distinguished from each other: nothing interrupts the line of sand hillocks. Tomorrow we shall be near to Baia Blanca; where I hope we shall remain some time.
This last week, although lost for surveying, has produced several animals; the examination of which has much interested me.
Captain Robert Fitzroy:
In exploring this exposed coast, southerly winds sometimes obliged us to struggle for an offing; and we lost several anchors in consequence of letting them go upon ground which we thought was hard sand lying over clay, but which turned out to be tosca, slightly covered with sand, and full of holes. The lead indicated a sandy, though hard bottom; but we found it every where so perforated and so tough, that, drop an anchor where we might, it was sure to hook a rock-like lump of tosca, which sometimes was torn away, but at others broke the anchor.
Finding this to be the case, I had a stout hawser 'bent' to the 'crown' of the anchor, and after shortening in cable, tripped the anchor by the hawser, and then weighed it, uninjured, without much difficulty.
Posted by Arborfield at 08:57