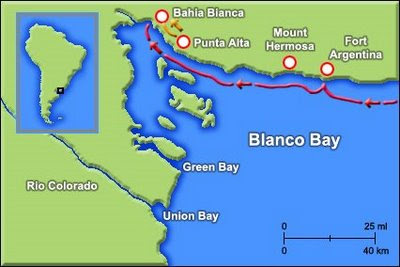 Bahia Blanca
We ran along 40 miles of coast & then anchored near to the mouth of the Bay: During the day I took several curious marine animals.
Captain Robert Fitzroy:
Along this extent of sea-coast, half way between the currents in the vicinity of the Plata, and those occasioned by strong tides near Blanco Bay and the river Negro, we found no current. Whether there was a rise of tide it was not easy to ascertain by the lead-line, when at anchor, from the bottom being so uneven; and to land was impossible, on account of a furious surf. Several kinds of fish were caught at our temporary anchorages, and noticed carefully by Mr. Darwin. Anchorage is not a word I should use in this case (where the anchor was only let go for a short time while the ship's position could be fixed with accuracy, and our triangulation carried on in a satisfactory manner), as it might deceive a stranger to the coast: stopping-place would be better.
While examining the positions nearest to Blanco Bay, we had occasional alarms—such as the wind shifting and blowing strong directly towards the land; our soundings shoaling suddenly to three, or less than three fathoms; or thick weather coming on while a boat was away sounding;—but these are every-day events in a surveying vessel actively employed.
Near Blanco Bay we found the water greatly discoloured, and the soundings were not such as to tempt us onwards; however, it was necessary to proceed. We steered towards a little hill, which I fancied must be Mount Hermoso,(*) and soon after sun-set, on the 5th, anchored in what we afterwards found to be the roadstead near that hillock, at the head of Blanco Bay, close to the entrance of Port Belgrano, but divided from it by a bank.
As the bad apologies for charts of this place, which we possessed at our first visit, left us as much at a loss as if we had none, I set out with the boats next morning to seek for a passage into Port Belgrano.(**)
* Mount Hermoso is but 140 feet above the sea; yet, on this low coast, it is somewhat remarkable, as being the only peaked hill close to the water; and having under it a low cliffy point, the only one thereabouts.
(**) Often erroneously called Bahia Blanco; a name originally given to the outer bay, in compliment to General Blanco.
Posted by Arborfield at 20:19