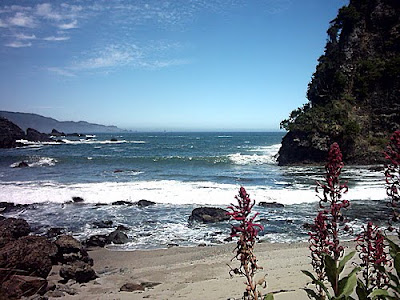 Captain Fitzroy’s Journal:
While lying at Port Low we caught plenty of fish with the seine; we obtained oysters from neighbouring creeks, and shot ducks and geese, so there was no want of fresh provision. Some piraguas from Chilóe were in the port: the Chilotes in them were in search of otters, seals, and nutria, and had come across the gulf of Huafo, in their ill-conditioned vessels, with no little trepidation.

On an outlying islet, near Port Low, I first saw the wild potato. Next to seeing a wild man, I recollect few objects which struck me much more than that group of wild potatoes:—but I have neither inclination nor space here to speak of my own sensations. The stems, leaves, and flowers of these vegetables were as large, and appeared to be as healthy, as those in an English garden, but the potatoes at their roots were small, watery, and insipid. It ought to be recollected, however, that we saw them early in January—corresponding to July—many weeks, at least, before one could expect to find eatable potatoes in an English field.

It was remarked in the Chonos islands, as well as in Tierra del Fuego, that the trees which grow in thin soil, lying upon slaty rocks, extend their roots so horizontally that it is not surprising to find, running through woodland, broad tracts whence the shallow-rooted trees have been swept away, partly by wind, partly by the action of mountain-torrents.* As wood grows even at the water's edge in those countries, where not exposed to the first attack of wind from seaward, and as there are so many loose overhanging masses of rock, one cannot be surprised at the vast quantities of drift-wood found in some places; or think it improbable for a quadruped to be occasionally precipitated into the sea, with a falling mass of rocks and trees, and afterwards drifted by wind and current to some other locality.

From Port Low we saw a notable mountain, one of the Cordillera of the Andes, having three points upon a small flat top, about eight thousand feet above the sea. I called it the Trident at that time; but afterwards learned that there are four peaks (one of which was hid by another from our point of view), and that it is called by the aborigines Meli-moyu, which in the Huilli-che language signifies four points.

Three other remarkable mountains, active volcanoes, are visible from the northern Huaytecas islands, as well as from Chilóe; I mean the Corcobado (hump-backed), of which I do not remember the Indian name; Yanteles (or Yanchiñu, which means 'having a shivering, and unnatural heat'), and Minchenmadom, which, in the Huilli-che tongue, means 'under a firebrand'; names so expressive and appropriate as to put to shame much of our own nomenclature. Wherever I have been able to discover the aboriginal name of a place in South America, and could ascertain its meaning, I have been struck by the extreme appositeness, as well as by the copious though condensed allusion usually conveyed.
In Chilóe and about the north-eastern Chonos Islands, almost all the aboriginal names are preserved, because there interpreters could be procured; but, of course, such advantages were generally unattainable in Patagonia and Tierra del Fuego. In Chilóe, as in Araucania, every corner and every conspicuous spot, whether land or water, has a particular and expressive name, a word usually compounded of two or three others: thus, Huapi-quilan means Three Islands: Calbu-co, Blue Water; Cauca-huapi, Gull Island; Huechu-cucuy, Point Cucuy, or Grandmother; Carel-mapu (Cara-el-mapu), Bad-city-country; Petu-cura, middle stone (a rock in Chacao Narrow), &c.

* The writer of Anson's voyage, speaking of Juan Fernandez, exactly describes the loose state of trees in such places, when he says, "The northern part of this island is composed of high, craggy hills, many of them inaccessible, though generally covered with trees. The soil of this part is loose and shallow, so that very large trees on the hills soon perish for want of root, and are then easily overturned, which occasioned the death of one of our sailors; who being upon the hills, in search of goats, caught hold of a tree upon a declivity, to assist him in his ascent, and this giving way, he immediately rolled down the hill; and though in his fall he fastened on another tree of considerable bulk, yet that, too, gave way, and he fell among the rocks, and was dashed to pieces. Mr. Brett likewise met with an accident, only by resting his back against a tree, near as large about as himself, which stood on a slope; for the tree giving way, he fell to a considerable distance, though without receiving any injury."
Posted by Arborfield at 07:22

The Second voyage of the HMS Beagle map http://maps.thefullwiki.org/Second_voyage_of_HMS_Beagle

As I found some surprises in Lewis Carroll's, Henry Holiday's and Joseph Swain's "The Hunting of the Snark" (1876), I also consider, that there are references to the voyage of the Beagle in the poem as well as in the illustrations: http://holiday.snrk.de/TheLanding.cgi.