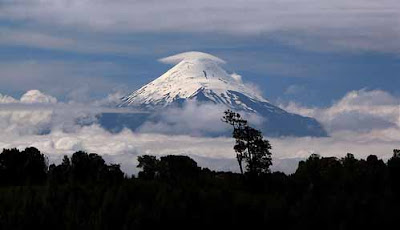 Chonos Archipelago
Early in the morning the ship ran out to sound on the English bank. A boat put me on shore on P. Tenuy, where I found some very interesting geology. In the evening we returned to our old anchorage at P. Arena. — During this night the Volcano of Osorno was in great activity; at 12 oclock the Sentry observed something like a large star, from which state it gradually increased in size till three oclock when most of the officers were on deck watching it. — It was a very magnificent sight; by the aid of a glass, in the midst of the great red glare of light, dark objects in a constant succession might be seen to be thrown up & fall down. — The light was sufficient to cast on the water a long bright shadow. — By the morning the Volcano seemed to have regained its composure. —

Captain Fitzroy’s Journal:
As some soundings were still wanted near the English bank, and about the approach to San Carlos, we employed the 19th in taking them, on board the Beagle, accompanied by her boats, and returned to our usual anchorage, close to Point Arena, at dark. When sounding on the English bank, we repeatedly tried to ascertain its nature by forcing a very long iron lance downwards as far as possible. The instrument penetrated about two feet into sand in all instances but one, when it was stopped abruptly by a substance which bent the lance and turned its point. It did not, however, feel like rock, rather, I should say, like hard wood. This hard place was about a square yard in extent, and all around was sand.
Posted by Arborfield at 07:48