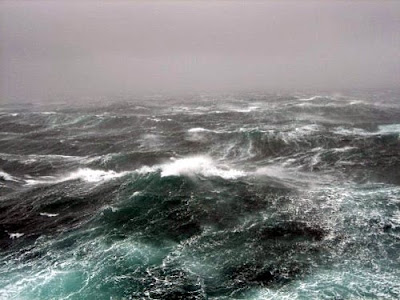 Chonos Archipelago
On the 15th we sailed & steered for the SW point of Chiloe; the next day it was attempted to survey the coast, but the weather again becoming bad, we bore up & run to an anchorage under Huafo. We had the misfortune to lose our best Bower anchor, which parted in bringing up the ship. — I went on shore in the evening, & extracted from the rock a good many fossil shells. — There are here some large caverns; one which I could by no means see the length of, had been inhabited some long time ago. — During the night it rained as if rain was a novelty; the rain in this country never seems to grow tired of pouring down.

Captain Fitzroy’s Journal:
We sailed from Port Low and went to Huafo once more, wishing to give Mr. Darwin an opportunity of examining it geologically. There are now no inhabitants on that island, though there are a good many sheep belonging to Chilotes, who live at Caylin. Formerly there were Indians called Huyhuen-che, upon Huafo; but the Spaniards obliged them to quit it, for fear they should give information or supplies to English ships. Near the Beagle, when at anchor, there was a square place, like an entrance to some cave, seemingly cut by man in the soft sand-stone rock; and I have since often reproached myself for having left the place without ascertaining its real nature. It may be the entrance to some cave, formerly used as a burying-place, similar to those explored by Low, and by the surgeon of the Wager.
Posted by Arborfield at 06:57