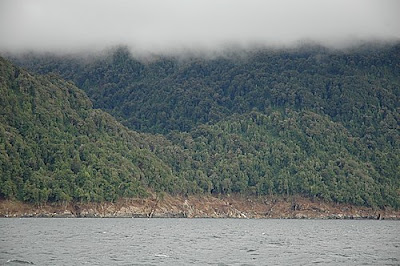 Chonos Archipelago
We ran along during the next day the Southern part of [the] outer coast of Chiloe; The country is similar to that on the inside coast viz a thickly wooded plain & white cliffs facing the sea: further to the North the coast becomes bolder. — We made during the night a good run and… [continued on the 18th]

Captain Fitzroy’s Journal:
On the 17th we sailed, and next day anchored off Point Arena, in San Carlos Harbour. Lieutenant Sulivan, with his party, had arrived a few days previously, after a very satisfactory cruise. We found his boats hauled up and refitted, his people lodged under their tents, and himself with Mr. Usborne busily occupied in my little observatory, laying down the work for which they had collected materials. Thus we were again assembled in safety, after being considerably divided, and, in consequence, exposed to numerous dangers which human prudence can neither foresee nor prevent.
Posted by Arborfield at 08:17