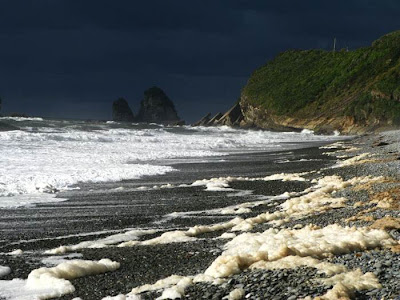 Chonos Archipelago
In the morning being left alone with the Indians, we soon ingratiated ourselves by presents of cigars & matte: a lump of white sugar was divided between all present & tasted with the greatest curiosity. — The Indians ended all their complaints by saying "& it is only because we are poor Indians & know nothing, but it was not so when we had a King". — I really think a boats crew with the Spanish flag might take the island of Chiloe.

The next day after breakfast we rode to P. Huantamò, a little way to the Northward; the road lay along a very broard beach, on which even after so many fine days a terrible surf was breaking. I am assured that after a gale the roar can be heard at night even at Castro, a distance of no less than twenty one sea miles across a hilly and wooded country. We had some difficulty in reaching the point owing to the intolerably bad paths; for every where in the shade, the ground in Chiloe soon becomes a perfect quagmire. The point itself is a bold rocky hill; it is covered by a plant allied I believe to the bromelias, with little recurved hooks on the leaves, and which the inhabitants call Chepones. In scrambling through the beds, our hands were very much scratched; I was amused by seeing the precaution our Indian guide took, in turning up his trowsers thinking them more delicate than his hard skin. — This plant bears a fruit, in shape like an Artichoke; in it a number of seed-vessels are packed together which contain a pleasant sweet pulp & are here much esteemed. I saw at Lowes Harbor the Chilotans making Chichi or cyder with this fruit; so true is it, that everywhere man finds some means to make intoxicating drink.

The coast to the Northward of P. Huantamò is exceedingly rugged & broken & is fronted by many breakers on which the sea is eternally roaring. — Mr King & myself were anxious to return, if it had been possible, on foot along this coast; but even the Indians say it is quite impracticable. — We were told that men have crossed by striking into the Woods from Cucao to S. Carlos, but never by the Coast. — On these expeditions the Indians only carry with them toasted corn; & of this they eat sparingly but twice a day.

I made some enquiries concerning the history of the Indians of Chiloe. They all speak the same language which is the Birliche or Williche: is different from that of the Araucanians; yet their method of address is nearly the same; the word being "Mari-Mari", which signifys "good morning". They recognize amongst themselves certainly some divisions: do not believe that the Ragunias or Chahues come (as Mr Douglass states) from the North, & only recognized the former name. They say the Bybenies formerly spoke quite a distinct language; the Commandante believes they came from the South. The Indian word, to the S. of C. Tres Montes, for the Potatoe is Aquina, here they have quite a distinct name. — These Indians of Cucao are said to have originally belonged to Isd [of] Huafo, & to have been brought over by the Missionaries. — In a similar manner the Missionaries finding the passage to the Chonos Islands difficult & dangerous tempted by presents the Inhabitants to come & live in Caylen. This agrees with what the Chilotans said in Lowes Harbor & it perfectly accounts for the deserted state of that Archipelago. — I before heard that the few remaining Bybenies chiefly lived in Caylen. Is it not probable that these are the original inhabitants of Chonos?

I understand since the time of the Patria, the Caciques have been entirely done away with.
Posted by Arborfield at 07:51