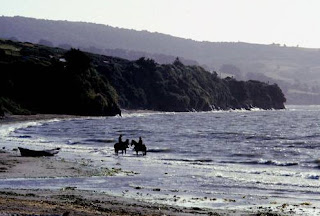 Chonos Archipelago
Capt FitzRoy being anxious that some bearings should be taken on the outer coast of Chiloe, an excursion was planned that Mr King & myself should ride to Castro & from thence across the Island to the Capella de Cucao, situated close to the West coast. — Having hired horses & a guide, we set out on the morning of the 22nd. We had not proceeded far, before we were joined by a woman & two boys, who were bent on the same journey. Every one on this road acts on a "Hail fellow well met" fashion: and one may here enjoy the priviledge, so rare in S America, of travelling without fire arms. — In the first part the road lies across a succession of hills & valleys; nearer to Castro it crosses a plain.— The road is a very singular affair as I have formerly said, is almost entirely composed of logs of wood. — These are either broard slabs laid longitudinally or smaller ones transversely to the direction of the road. — Being summer time & fine weather the road is not so very bad; but in winter, when the wood is slippery with rain, by all accounts the travelling becomes quite dangerous. It is remarkable how active custom has made the Chilotan horses; in crossing bad parts of the road where the logs are displaced, the horse skips from one to the other with quickness & certainty of a dog. — In winter the road on each side of the line of logs is a perfect swamp & is in many places overflowed; so that the logs are fastened down by transverse poles, which are pegged into the earth on each side. — These same pegs render a fall from a horse more dangerous as the chance of alighting on one is not small. — On either hand of the road we have the forest of lofty trees, their bases matted together by the Canes. — When occasionally a long reach of this avenue could be seen, it presented a curious scene of uniformity; the white line of logs, narrowing in perspective, became hidden by the one colored forest, or it terminated in a zig zag line which ascended some steep hill. — The first opening of this road must have cost considerable labor. — I was told that many people had lost their lives in attempting to cross the forest, & that the first who succeeded was an Indian who cut his way through the canes in 8 days & reached S. Carlos. — He was rewarded by the Spanish government by a large grant of land. — The distance in a straight line is only 12 sea-leagues, yet from the nature of the forest the labor must have been excessive. — During the summer time many of the Indians wander about the woods, chiefly in the higher parts where it is not quite so thick, in search of half wild cattle, which live in the forest on the leaves of the Cane & various trees. It was one of these Indians who by chance found a few years since an English ship which had been wrecked on the West coast, the crew of which was beginning to fail in provisions: it is not probable [that] without the aid of this man, they would have been able to extricate themselves. — as it was, one of the men died of fatigue on their march. — The Indians in these excursions steer by the Sun & are very expert in finding their way; if however they have a continuance of cloudy weather, they cannot travel; This reminds one of the state which navigation must have been in before the invention of the compass.

The road to Castro will before very long become inhabited; we now meet 3 or 4 cleared spots, each with its house, in the interval between the two inhabited ends. — It is at this time of year much frequented; chiefly however by foot men, who carry on their backs heavy loads of corn &c &c & buy at S. Carlos clothese, Capsicum &c to sell in the country. These men perform the journey in less than two days.

The day was beautiful; the number of trees which were in full flower perfumed the air; yet even this could scarcely dissipate the gloomy dampness of the forest. The number of dead trunks, which stand like great white skeletons, never fails to give these primeval woods a character of solemnity which is wanting in those of countries long civilized, such as England.

I noticed in some particular tracts that nearly all the large trees were dead. — I cannot give any reason for this. — My guide cut the matter short by saying that a "bad wind" had killed them! Shortly after sunset, we bivouaced for the night. Our female companion was rather good looking; she belonged to one of the most respectable families in Castro. — She rode, however, without shoes or stockings & cross-legged. — I was surprised at the want of pride shown by both her & her brother; they brought food with them, but at all our meals sat watching Mr King & myself eating, till out of shame they compelled us to feed the whole party. — The night was cloudless; we enjoyed, & it is an high enjoyment, whilst lying in our beds the sight of the multitude of stars which brightened the darkness of the forest.
Posted by Arborfield at 07:49