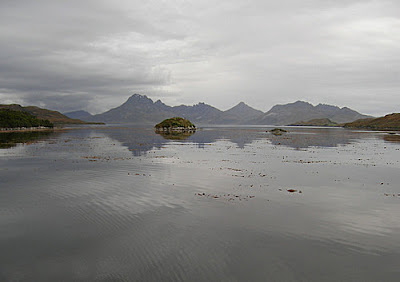 Chonos Archipelago
The Captain's faith is rewarded by a beautiful day & Southerly wind. After noon, the ship was hove to, & the Captain ran in his boat to reconnoitre some harbors. We passed a dead whale; it was not very putrid; the barnacles & great parasitical crabs being alive; the skin of this great mass of flesh & blubber was quite pink; I suppose owing to partial decomposition. (Note in margin: Outer thin skin having been removed.) In one of the harbors in P. Tres Montes, we found another cast up on the beach & of the same color. A sight of a Whale always puts me in mind of the great fossil animals; he appears altogether too big for the present pigmy race of inhabitants. He ought to have coexisted with his equals, the great reptiles of the Lias epoch.

During our absence, a French Whaler bore down on the Beagle & here we found her Captain on board. He had lately been at anchor when two other great ships; one of which was commanded by our old friend Le Dilly, who was wrecked in the Falklands. So that the French government are not tired of their expensive school to make Sailors.
Posted by Arborfield at 07:54