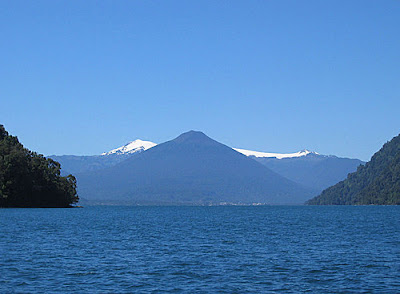 Chonos Archipelago
The NW winds continued to prevail & we only managed to cross a sort of great bay & anchored in an excellent harbor. — This is the place where the Anna Pink, one of Lord Anson's squadron, found refuge during the disasters which beset him.* A boat with the Captain went up to the head of the bay. The number of the Seals was quite astonishing; every bit of flat rock or beach was covered with them. They appear to be of a loving disposition & lie huddled together fast asleep like pigs: but even pigs would be ashamed of the dirt & foul smell which surrounded them. Often times in the midst of the herd, a flock of gulls were peaceably standing: & they were watched by the patient but inauspicious eyes of the Turkey Buzzard. — This disgusting bird, with its bald scarlet head formed to wallow in putridity, is very common on this West Coast. Their attendance on the Seals shows on the mortality of what animal they depend.

We found the water (probably only that of the surface) nearly fresh; this is caused by the number of the mountain torrents which in the form of cascades come tumbling over the bold Granite rocks into the very sea. — The fresh- water attracts the fish & this brings many terns, gulls & two kinds of cormorant. — We saw also a pair of the beautiful black- necked swans; & several small sea-otters, the fur of which is held in such high estimation. In returning we were again amused by the impetuous manner in which the heap of seals, old & young, tumbled into the water as the boat passed by. They would not remain long under, but rising, followed us with outstreched necks, expressing great wonder & curiosity.

The entire absence of all Indians amongst these islands is a complete puzzle. That they formerly lived here is certain, & some even within a hundred years; I do not think they could migrate anywhere; & indeed, what could their temptation be? For we here see the great abundance of the Indians highest luxury, seals flesh; I should suppose the tribe has become extinct; one step to the final extermination of the Indian race in S. America.

* The small merchantman or pink Anna accompanied Anson's fleet on the voyage in which after capturing the Spanish galleons laden with treasure from Manila, he completed the circumnavigation of the globe. Earlier in the voyage, after rounding Cape Horn in April 1741, the ships were scattered in a severe storm, and the badly damaged Anna was repaired here at Port Refuge before proceeding to the rendezvous with Anson at Juan Fernandez Island.

Captain Fitzroy’s Journal:
On the 4th we moved to Port Refuge, a safe, but out of the way place. In the "narrative of what befel the Anna Pink," given in Anson's Voyage, this harbour is described in very glowing colours; but we may remember that those who discovered it, were there saved from destruction; and naturally looked upon all things around them with excited feelings.* How the officers of the Santa Barbara made their survey of this port and its neighbourhood I am at a loss to know; a mere eye-sketch, drawn upon the spot, might have been much better than that which they gave to the world as a mathematical plan. In their distorted representation of Port Refuge, many soundings have been scattered, apparently at random, and quite at variance with truth. This is so unlike most Spanish works of a similar nature, some of which are very accurate, considering the date of their manufacture, and the means employed,—that I conclude the officers of that frigate, not understanding marine surveying, merely drew rough sketches of what they saw, which were afterwards 'cooked' into a more regular 'appearance,' by some one who was not on board with them. Had time allowed I should have explored the Gulf of San Rafael, at the back of Tres Montes Peninsula, but knowing that it could only be an object of geographical, not immediately practical interest to do so, I refrained from indulging mere curiosity, much as I desired to corroborate the account of Spanish missionaries who often went there, crossing the Isthmus of Ofqui, in search of Indians among the Guaianeco islands, and even farther south, of whom they might make converts to Christianity. Doubtless some of these voyages were undertaken and completed with benevolent and single-minded intentions; but I suspect that others were conducted on a different principle; and that their chief object was to procure able-bodied slaves to be employed in the mines of Chilóe or Southern Chile. I should be glad to learn that this suspicion is ill-founded.**

* Anson's Voyage, chapter iii.
** It is difficult to account for the present abandoned state of these regions, if no harsh usage was experienced by their former natives.
Posted by Arborfield at 07:05