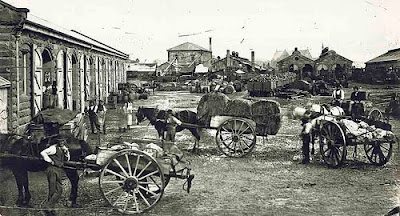 Sydney
Early in the morning, a light air carried us towards the entrance of Port Jackson: instead of beholding a verdant country scattered over with fine houses, a straight line of yellowish cliff brought to our mind the coast of Patagonia. A solitary lighthouse, built of white stone, alone told us we were near to a great & populous city. — Having entered the harbor, it appeared fine & spacious; but the level country, showing on the cliff-formed shores bare & horizontal strata of sandstone, was covered by woods of thin scrubby trees that bespoke useless sterility. — Proceeding further inland, parts of the country improved; beautiful Villas & nice Cottages were here & there scattered along the beach; and in the distance large stone houses, two or three stories high, & Windmills standing on the edge of a bank, pointed out to us the neighbourhead of the Capital of Australian civilization.

At last we anchored within Sydney Cove; we found the little basin, containing many large ships & surrounded by Warehouses. — In the evening I walked through the town & returned full of admiration at the whole scene. — It is a most magnificent testimony to the power of the British nation: here, in a less promising country, scores of years have effected many times more than centuries in South America. — My first feeling was to congratulate myself that I was born an Englishman: — Upon seeing more of the town on other days, perhaps it fell a little in my estimation; but yet it is a good town; the streets are regular, broad, clean & kept in excellent order; the houses are of a good size & the Shops well furnished. — It may be faithfully compared to the large suburbs which stretch out from London & a few other great towns:— but not even near London or Birmingham is there an aspect of such rapid growth; the number of large houses just finished & others building is truly surprising; nevertheless every one complains of the high rents & difficulty in procuring a house. — In the streets gigs, phaetons & carriages with livery servants are driving about; of the latter many are extremely well equipped. Coming from S. America, where in the towns every man of property is known, no one thing surprised me more, than not readily being able to ascertain to whom this or that carriage belonged. — Many of the older residents say that formerly they knew every face in the Colony, but now that in a morning's ride, it is a chance if they know one. — Sydney has a population of twenty-three thousand, & is as I have said rapidly increasing; it must contain much wealth; it appears a man of business can hardly fail to make a large fortune; I saw on all sides fine houses, one built by the profits from steam-vessels, another from building, & so on. An auctioneer who was a convict, it is said intends to return home & will take with him 100,000 pounds. — Another who is always driving about in his carriage, has an income so large that scarcely anybody ventures to guess at it, the least assigned being fifteen thousand a year. — But the two crowning facts are, first that the public revenue has increased 60,000 £ during this last year, & secondly that less than an acre of land within the town of Sydney sold for 8000 pounds sterling.

I hired a man & two horses to take me to Bathurst, a village about one hundred & twenty miles in the interior, & the centre of a great pastoral district; by this means I hoped to get a general idea of the appearance of the country.

Syms Covington Journal
After a long passage which was occasioned by headwinds and calms, we moored ship in Sydney Cove, New South Wales, January 12th 1836 (a passage very often made in five days by the traders).

Port Jackson (Sydney), where the first settlers landed IN 1788. THERE IS A lighthouse on left hand side going in. The harbour, I think, is one of the finest and most beautiful I have yet seen. About here the land is low, even lower than New Zealand, a fine harbour, two forts, town large and populous, situated rather on side of hill. Hot, or sirocco-like, winds are frequent here, AND THE weather very precarious. When sun's out, there appears TO BE a very strong glare, which I think injures the sight as I saw many Whites here with weak eyesight.
Posted by Arborfield at 07:25