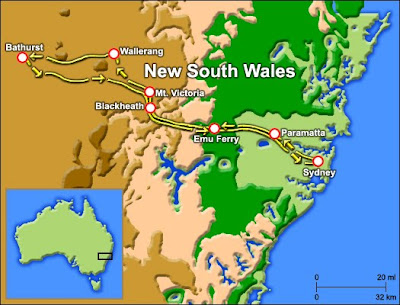 New South Wales
In the morning of the 16th I set out on my excursion; the first stage took us through Paramatta, a small country town, but second to Sydney in importance. — The roads were excellent & made on the Macadam principle, whinstone being brought from the distance of several miles for this purpose; nor had turnpikes been forgotten. — The road appeared much frequented by all sorts of carriages. — I met two Stage Coaches. — In all these respects there was a most close resemblance to England; perhaps the number of Ale-houses was here in excess. The Iron gangs, or parties of convicts, who have committed some trifling offence in this country, appeared the least like England: they were dressed in yellow & grey clothes, & were working in irons under the charge of sentrys with loaded arms. — I believe one chief cause of the early prosperity in these Colonies is government thus being able by means of forced labour to open at once good roads throughout the country.

I slept at night at a very comfortable Inn at Emu ferry, which is thirty-five miles from Sydney & near the ascent of the Blue Mountains. — This line of road is the most frequented & has longest been inhabited of any in the Colony. — The whole land is enclosed with high railings, for the farmers have not been able to rear hedges. — There are many substantial houses & good cottages scattered about; but although considerable pieces of the land are under cultivation, the greater part yet remains as when first discovered. — Making allowances for the cleared parts, the country here resembles all that I saw during the ten succeeding days. — The extreme uniformity in the character of the Vegetation, is the most remarkable feature in the landscape of the greater part of New S. Wales. — Everywhere we have an open woodland, the ground being partially covered with a most thin pasture. The trees nearly all belong to one family; & have the surface of their leaves placed in a vertical instead of as in Europe a nearly horizontal position; This fact & their scantiness makes the woods light & shadowless; although under the scorching sun of the summer this is a loss of comfort, it is of importance to the farmer, as it allows grass to grow where it otherwise could not. — The greater number of the trees, with the exception of some of the Blue Gums, do not attain a large size; but they grow tall & tolerably straight & stand well apart. It is singular that the bark of some kinds annually falls, or hangs dead in long shreds, which swing about with the wind; & hence the woods appear desolate & untidy. — Nowhere is there an appearance of verdure or fertility, but rather that of arid sterility: — I cannot imagine a more complete contrast in every respect, than the forest of Valdivia or Chiloe, with the woods of Australia.

Although this country flourishes so remarkably, the appearance of infertility is to a certain degree real; the soil without doubt is good, but there is so great a deficiency in rain & running water, that it cannot produce much. — The Agricultural crops & indeed often those in gardens, are estimated to fail once in three years; & it has even thus happened on successive years: — hence the Colony cannot supply itself with the bread & vegetables which its inhabitants consume. — It is essentially pastoral, & chiefly so for sheep & not the larger quadrupeds: the alluvial land near Emu ferry is some of the best cultivated which I have seen; & certainly the scenery on the banks of the Nepean, bounded to the West by the Blue Mountains, was pleasing even to the eye of a person thinking of England.

At Sunset by good fortune a party of a score of the Aboriginal Blacks passed by, each carrying in their accustomed manner a bundle of spears & other weapons. — By giving a leading young man a shilling they were easily detained & they threw their spears for my amusement. — They were all partly clothed & several could speak a little English; their countenances were good-humoured & pleasant & they appeared far from such utterly degraded beings as usually represented. — In their own arts they are admirable; a cap being fixed at thirty yards distance, they transfixed it with the spear delivered by the throwing stick, with the rapidity of an arrow from the bow of a practised Archer; in tracking animals & men they show most wonderful sagacity & I heard many of their remarks, which manifested considerable acuteness. — They will not however cultivate the ground, or even take the trouble of keeping flocks of sheep which have been offered them; or build houses & remain stationary. — Never the less, they appear to me to stand some few degrees higher in civilization, or more correctly a few lower in barbarism, than the Fuegians.

It is very curious thus to see in the midst of a civilized people, a set of harmless savages wandering about without knowing where they will sleep, & gaining their livelihood by hunting in the woods. — Their numbers have rapidly decreased; during my whole ride with the exception of some boys brought up in the houses, I saw only one other party. — These were rather more numerous & not so well clothed. — I should have mentioned that in addition to their state of independence of the Whites, the different tribes go to war. In an engagement which took place lately the parties, very singularly chose the centre of the village of Bathurst as the place of engagement; the conquered party took refuge in the Barracks. — The decrease in numbers must be owing to the drinking of Spirits, the Europæan diseases, even the milder ones of which such as the Measles are very destructive, & the gradual extinction of the wild animals. It is said that from the wandering life of these people, great numbers of their children die in very early infancy. When the difficulty in procuring food is increased, of course the population must be repressed in a manner almost instantaneous as compared to what takes place in civilized life, where the father may add to his labor without destroying his offspring.
Posted by Arborfield at 08:04