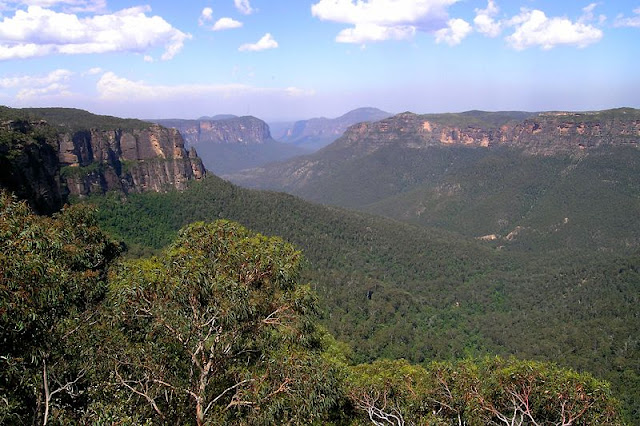 Early in the morning we passed the Nepean in a ferry boat. The river, although at this spot both broad & deep, has a very small body of running water. Having crossed a low piece of land on the opposite side we reached the slope of the Blue Mountains. The ascent is not steep, the road having been cut with much care on the side of the Sandstone cliffs; at no great elevation we come to a tolerably level plain, which almost imperceptibly rises to the Westward, till at last its height exceeds three thousand feet. By the term Blue Mountains, & hearing of their absolute elevation, I had expected to see a bold chain crossing the country; instead of this a sloping plain presents merely an inconsiderable front to the low country. — From this first slope, the view of the extensive woodland towards the coast was interesting, & the trees grew bold & lofty; but when once on the sandstone platform, the scenery became exceedingly monotomous. On each side the road was bordered by a scrubby wood of small trees of the never-failing Eucalyptus family; with the exception of two or three small Inns there were no houses or cultivated land. The road was likewise solitary, the most frequent object being a bullock-waggon piled up with bales of Wool.

In the middle of the day we baited our horses at a little Inn, called the Weather-board. The country here is elevated 2800 feet above the sea. About a mile & a half from this place there is a view exceedingly well worth visiting; following down a little valley & its tiny rill of water, an immense gulf is suddenly & without any preparation seen through the trees which border the pathway at the depth of perhaps 1500 ft. Walking a few yards farther, one stands on the brink of a vast precipice, & below is the grand bay or gulf, for I know not what other name to give it, thickly covered with forest. The point of view is situated as it were at the head of the bay, for the line of cliff diverges away on each side, showing headland behind headland, as on a bold Sea coast. These cliffs are composed of horizontal strata of whitish Sandstone; & so absolutely vertical are they, that in many places a person standing on the edge & throwing a stone can see it strike the frees in the abyss below: so unbroken is the line, that it is said to be necessary to go round a distance of sixteen miles in order to reach the foot of the waterfall made by this little stream. — In front & about five miles distant another line of cliff extends, thus having the appearance of completely encircling the valley; hence the name of Bay is justified as applied to this grand amphitheatrical depression. — If we imagine that a winding harbor with its deep water surrounded by bold cliff shores was laid dry, & that a forest sprung up on the sandy bottom, we should then have the appearance & structure which is here exhibited. The class of view was to me quite novel & extremely magnificent. In the evening we reached the Blackheath; the Sandstone plateau has here attained the elevation of 3411 ft, & is covered as before, with one monotomous wood. — On the road, there were occasional glimpses of a profound valley, of the same character as the one described; but from the steepness & depth of its sides, the bottom was scarcely ever to be seen. — The Blackheath is a very comfortable inn, kept by an old Soldier; it reminded me of the small inns in North Wales. I was surprised to find that here, at the distance of more than seventy miles from Sydney, fifteen beds could be made up for travellers.
Posted by Arborfield at 07:28