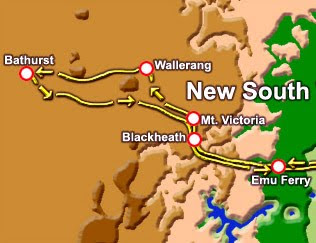 New South Wales
Bathurst has a singular & not very inviting appearance; groups of small houses, & a few large ones, are scattered rather thickly over two or three miles of a bare country which is divided into numerous fields by lines of rails. A good many gentlemen live in the neighbourhood & some possess very comfortable houses. A hideous little red brick Church stands by itself on a hill & there are barracks & government buildings. — I was told not to form too bad an opinion of the country by judging of it on the road side, nor too good a one from Bathurst; in this latter respect I did not feel myself in the least danger of being prejudiced. It must be confessed that the season had been one of great drought, & that the country did not wear a favourable aspect; although I understand two or three months ago it was incomparably worse. The secret of the rapidly growing prosperity of Bathurst is that the pasture, which appears to the stranger's eye wretched, is for sheep grazing excellent. The town stands on the banks of the Macquarie: this is one of the rivers whose waters flow into the vast unknown interior. The North & South line of watershed which divides the inland streams from those of the coast has an elevation of about 3000 ft., (Bathurst is 2200) & runs at a distance of about eighty or a hundred miles from the seaside. — The Macquarie figures in the maps as a respectable river, & is the largest of those draining this part of the inland slope: — yet to my surprise I found it a mere chain of ponds, separated from each other by spaces almost dry; generally a little water does flow, & sometimes there are high & impetuous floods. Very scanty as the supply of water is in all this district, it becomes, further in the interior, still scarcer.

The Officers all seemed very weary of this place & I am not surprised at it: it must be to them a place of exile: Last year there had been plenty of Quail to shoot, but this year they have not appeared; this resource exhausted, the last tie which bound them to existence, seemed on the point of being dissolved. — Capt. Chetwode had attempted gardening; but to see the poor parched herbs was quite heart-breaking. Yesterday's hot wind had alone cut off many scores of young apples, peaches & grapes.
Posted by Arborfield at 08:33