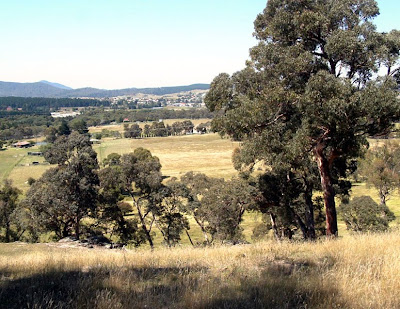 New South Wales
Very early in the morning I walked about three miles to see Govett's Leap; a view of a similar, but even perhaps more stupendous character than that of the Weatherboard. So early in the day the gulf was filled with a thin blue haze, which, although destroying the general effect, added to the apparent depth of the forest below, from the country on which we stood. Mr Martens who was formerly in the Beagle & now resides in Sydney, has made striking & beautiful pictures from these two views.

A short time after leaving the Blackheath, we descended from the sandstone platform by the pass of Mount Victoria. To effect this pass, an enormous quantity of stone has been cut through; the design & its manner of execution would have been worthy of a line of road in England, even that of Holyhead. — We now entered upon a country less elevated by nearly a thousand feet & consisting of granite: with the change of rock the vegetation improved; the trees were both finer & stood further apart, & the pasture between them was a little greener & more plentiful.

At Hassan's walls I left the high road & made a short detour to a farm called Walerawang; to the superintendent of which I had a letter of introduction from the owner in Sydney. Mr Browne had the kindness to ask me to stay the ensuing day, which I had much pleasure in doing. This place offers an example of one of the large farming or rather sheep grazing establishments of the Colony; cattle & horses are however in this case rather more numerous than usual, owing to some of the valleys being swampy & producing a coarser pasture. The sheep were 15,000 in number, of which the greater part were feeding under the care of different shepherds on unoccupied ground, at the distance of more than a hundred miles beyond the limits of the Colony. Mr Browne had just finished this day the last of the shearing of seven thousand sheep; the rest being sheared in another place. — I believe the value of the average produce of wool from 15,000 sheep would be more than 5000£ sterling. Two or three flat pieces of ground near the house were cleared & cultivated with corn, which the harvest men were now reaping. No more wheat is sown than sufficient for the annual support of the labourers; the general number of assigned convict servants being here about forty; but at present there were rather more. Although the farm is well stocked with every requisite, there was an apparent absence of comfort; & not even one woman resided here. — The Sunset of a fine day will generally cast an air of happy contentment on any scene; but here at this retired farmhouse the brightest tints on the surrounding woods could not make me forget that forty hardened profligate men were ceasing from their daily labours, like the Slaves from Africa, yet without their just claim for compassion.
Posted by Arborfield at 07:32