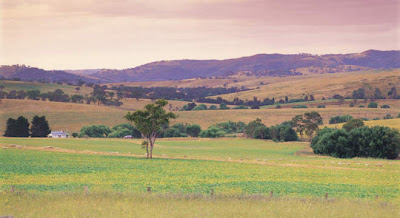 A long days ride to Bathurst; before joining the high road we followed a mere path through the forest; the country with the exception of a few squatters huts was very solitary. A "squatter" is a freed or "ticket of leave" man, who builds a hut with bark in unoccupied ground, buys or steals a few animals, sells spirits without a license, receives stolen goods & so at last becomes rich & turns farmer: he is the horror of all his honest neighbours. — A "crawler" is an assigned convict, who runs away & lives how he can by labor or petty theft. — The "Bush Ranger" is an open villain, who subsists by highway robbery & plunder; generally he is desperate & will sooner he killed than taken alive. — In the country it is necessary to understand these three names, for they are in perpetual use.

This day we had an instance of the sirocco-like wind of Australia; which comes from the parched deserts of the interior. While riding, I was not fully aware, as always happens, how exceedingly high the temperature was. — Clouds of dust were travelling in every part, & the wind felt like that which has passed over a fire. — I afterwards heard the thermometer out of doors stood at 119° & in a room in a closed house 96°.— In the afternoon we came in view of the downs of Bathurst. These undulating but nearly Level plains are very remarkable in this country by being absolutely destitute of a single tree: they are only covered by a very thin, brown pasture. We rode some miles across this kind of country, & then reached the township of Bathurst, seated in [the] middle of what may be described as a very broad valley, or narrow plain. I had a letter of introduction to the commandant of the troops, & with him I staid the ensuing day.
Posted by Arborfield at 07:50