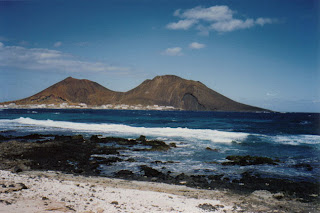 St Jago
At about 11 oclock we neared the Western coast of St Jago and by about three we anchored in the bay of Porto Praya. St Jago viewed from the sea is even much more desolate than the land about Santa Cruz. The Volcanic fire of past ages and the scorching heat of a tropical sun have in most places rendered the soil sterile and unfit for vegetation. The country rises in successive steps of table land, interspersed by some truncate conical hills, and the horizon is bounded by an irregular chain of more lofty and bolder hills. The scene when viewed through the peculiar atmosphere of the tropics was one of great interest: if indeed a person fresh from sea and walking for the first time in a grove of Cocoa-nut trees, can be a judge of anything but his own happiness.

At three oclock I went with a party to announce our arrival to the "Governador". After having found out the house, which certainly is not suited to the grandeur of his title we were ushered into a room where the great man most courteously received us. After having made out our story in a very ludicrous mixture of Portuguese, English and French, we retreated under a shower of bows. We then called on the American Consul who likewise acts for the English. The Portugeese might with great advantage have instilled a little of his well-bred politesse into this quarter. I was surprised at the houses: the rooms are large and airy, but with uncommonly little furniture, and that little in vile taste.

We then strolled about the town, and feasted upon oranges: which I believe are now selling a hundred per shilling. I likewise tasted a Banana: but did not like it, being maukish and sweet with little flavor. The town is a miserable place, consisting of a square and some broad streets, if indeed they deserve so respectable a name. In the middle of these "Ruas" are lying together goats, pigs and black and brown children: some of whom boast of a shirt, but quite as many not: these latter look less like human beings than I could have fancied any degradation could have produced.- There are a good many black soldiers, it would be difficult I should think to pick out a less efficient body of men. Many of them only possess for arms a wooden staff.

Before returning to our boat, we walked across the town and came to a deep valley. Here I first saw the glory of tropical vegetation: Tamarinds, Bananas and Palms were flourishing at my feet. I expected a good deal, for I had read Humboldts descriptions and I was afraid of disappointments: how utterly vain such fear is, none can tell but those who have seen experienced what I to day have. It is not only the gracefulness of their forms or the novel richness of their colours, it is the numberless and confusing associations that rush together on the mind that produces the effect.

I returned to the shore, treading on Volcanic rocks, hearing the notes of unknown birds, and seeing new insects fluttering about still newer flowers. It has been for me a glorious day, like giving to a blind man eyes, he is overwhelmed with what he sees and cannot justly comprehend it. Such are my feelings, and such may they remain.