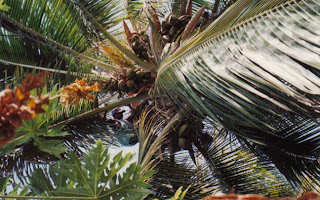 St Jago
Rowlett, Bynoe and myself started early in the morning on a riding expedition to Ribera Grande. We went to Praya to get our horses and there had our breakfast. The greatest shopkeeper in the place was our host: He is an American and has married a Spanish woman and seems one of the most influential people in the place. After we had finished our Coffee in his large and airy rooms, we mounted our ponys.
.
The road to Ribera for the first six miles is totally uninteresting and till we arrived at the valley of St Martin the country presented its usual dull brown appearance: here our eyes were refreshed by the varied and beautiful forms of the tropical trees. The valley owes its fertility to a small stream and following its course Papaw trees, Bananas and Sugar cane flourished. I here got a rich harvest of flowers, and still richer one of fresh water shells. After having watered our active and sure footed little horses, we again commenced climbing. In the course of an hour, we arrived at Ribera and were astonished at the sight of a large ruined fort and a Cathedral: Ribera Grande which lies 9 miles to the West of Praya and was till within later years the principal place in the island. The filling up of its harbour has been the cause of the overthrow of its grandeur. It now presents a melancholy, but very picturesque appearance. The town is situated at the foot of a high black precipice, through which a narrow and abrupt valley has cut its way.
.
The vegetation in this little corner was most beautiful; it is impossible sufficiently to admire the exquisite form of the Cocoa-nut tree, and when, as in this case, they are seen waving their lofty heads above the dark green of an Orange Grove, one feels convinced that all the praise bestowed on tropical scenery is just. Having procured a black padre for a guide, and a Spaniard who had served in the Peninsular war for our interpreter, we visited a collection of buildings of which an antient Church forms the principal part. It is here the Governors and Captain Generals of the Islands are buried, some of the tombstones recorded dates of the fourteenth century; the heraldic ornaments were the only things in this retired place that reminded one of Europe.
.
This Church or Chapel formed one of the sides of a Quadrangle, in which Bananas were growing. On two of the others were the buildings in which the the people connected with the institution lived. On the fourth was a hospital, containing about a dozen of miserable looking inmates. In one of the rooms, to our surprise, we were shown a collection of tolerable paintings, the colouring and drawing of the drapery was excellent.
.
We then, accompanied as before, returned to the "Venda" and eat our dinner. To see which operation a concourse of black men, women and children had collected. We luckily had brought some cold meat: as the only things the men helped us to were wine and crumbs made from Indian corn. Certainly the whole scene was most amusing, our companions the blacks were extremely merry, every thing we said or did was followed by their hearty laughter. Our Spanish interpreter now left us, before mounting his donkey, he loaded a formidable pistol with slugs quietly remarking, "this very good for black man".
.
Before leaving Ribera, we visited the Cathedral. It is a building of some size, but does not appear from the absence of plate to be so rich as the smaller Church. It boasts however of a small organ, which sent forth most singularly inharmonious notes. We presented our friend the black priest (which the Spaniard with much candour said he thought made no difference) with a few shillings and wishing him good morning returned as fast as the Ponys would carry us to Porto Praya.
Posted by Arborfield at 07:48