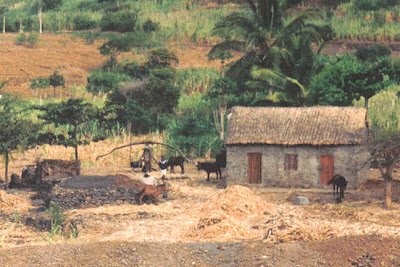 St Jago
I took a long walk with Maccormick into the interior. Although in such a country the objects of interest are few, yet perhaps from this very reason, each individual one strikes the imagination the more. We followed one of the broad water courses, which serves as a road for the country people, by the greatest good luck it lead us to the celebrated Baobob trees. I had forgotten its existence, but the sight immediately recalled a description of it which I had formerly read. This enormous tree measured 36feet 2 inches at the height of 2’ 8” from ground. Its altitude in no way corresponds with its great thickness. I should not suppose it was 30 feet high. This tree is supposed to be one of longest lived that exists. Adanson supposed that some reached to the age of 6000 years. This one bears on its bark the signs of its notoriety it is as completely covered with initials and dates as any one in Kensington Gardens.
We passed on with nothing except the novelty of the scene that could give us any enjoyment: the glowing sun above our heads was the only thing that reminded us we were in the tropics. Nature is here sterile, nothing breaks the absolute stillness, nothing is seen to move: we may indeed except a gay coloured kingfisher and its prey, the less gaudy grasshopper. At midday, we seated ourselves under the shade of a Tamarind and measured out our small portion of water. The bluish green tint of its colour and the extreme lightness of its pinnate foliage gives to this Acacia a most pleasing appearance. We then left the valley and crossed over to Red hill, which is 1300 high and composed of more recent Volcanic rocks.
On road, two black men brought us some goats milk, to pay them we put some copper money on our open hands: they took a farthing, and when we gave them a penny, we hardly could prevent them pouring down a quart of milk into our very throats. These merry simple hearted men left us in roars of laughter. I never saw anything more intelligent than the Negros, especially the Negro or Mulatto children. They all immediately perceived and are astonished at the percussion guns, they examine every thing with the liveliest attention, and if you let them the children chattering away, will pull everything out of your pockets to examine them it. My silver pencil case was pulled out and much speculated upon. When catching a stinging ichneumon, the children pinched themselves in order to show that the insect would pain me.
We scaled the top of the Red hill and from it had a good view of the most desolate countrys in the world. Our road home, near to Praya, lay through a more fertile valley and few will imagine how refreshing is the sight of the dark green of the Palm.
We returned to the vessel very thirsty and covered with dust, but not much fatigued, neither did I suffer much from the heat of the sun.
Posted by Arborfield at 07:49